The international star says she misses hanging out with her former SCQ friends. 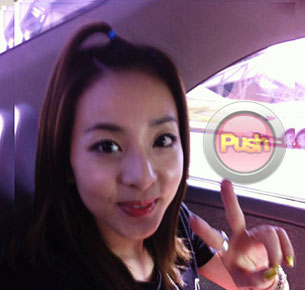 On her last day in Manila, Korean pop star Sandara Park visited former colleagues at ABS-CBN. While her groupmates from 2NE1--CL, Bom and Minzy--opted to stay at their hotel to rest before their flight back to Korea, Sandara decided to drop by to say hello to her former Star Magic mentor Mr. Johnny Manahan, the staff of Sunday noontime show ASAP (where she was a regular) and some celebrity friends. Sandara had just returned from Albay that morning with the rest of 2NE1.

Because of time restraints, Sandara had to rush to different areas of the Kapamilya network starting with a visit to Mr. M, who was at the time directing ASAP’s live show from the control booth. The two had a short chat and she soon went to see the show’s staff including Joyce Liquicia, ASAP’s business unit head. She then headed off to the MYX studio to meet Luis Manzano, the former Star Circle Quest (SCQ) host but she eventually went back to the ASAP dressing rooms to see him. Here, she was also able to talk Kim Chiu, who is an admitted fan of Sandara.

Afterwards, Sandara headed straight to a nearby restaurant have her favorite sisig, sinigang na hipon, pakbet, gambas, and kinilaw na pusit for lunch. Here, she got to hang out with actor Joross Gamboa, one of her closest buddies from SCQ.

Sandara also decided to buy Italian food for the 2NE1 members and their entourage and here, another former SCQ member, Raphael Martinez ,caught up with them. On her way back to her hotel, Joross called actress Melissa Ricks, who was on a Walang Hanggan mall tour in Lucena, and had her talk to Sandara. Melissa thanked Sandara for the belated birthday gift the latter had sent her days earlier. Melissa was particularly touched that Sandara remembered to get what she really wanted.

It was a short trip to her “second home” and Sandara hopes she will have more time to spend with her friends the next time she visits again.