Sandara Park and the girls of 2NE1 back in the Philippines

The K-pop sensations have returned to Sandara's old 'hometown' for some r&r. 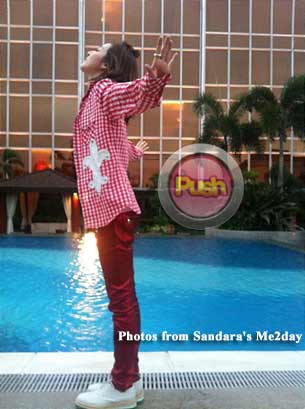 Sandara Park is back in the Philippines with the rest of her K-pop group 2NE1 in tow. After arriving yesterday in Manila, Sandara sent a picture through her Me2Day account (an online picture journal) for her Filipino fans to let them know how happy she is to be back in her second home.

Next on Sandara, CL, Bom and Minzy’s schedule is some rest and relaxation somewhere outside Manila. Sandara, in an old interview, said she would often talk about the Philippines to the other members of her group and how she would like to take them on a vacation here.

The former teen star squeezed in her tight schedule to meet some old friends yesterday for some catching up. She also gave Melissa Ricks a belated birthday gift through their friends as the actress was taping for her show Walang Hanggan.

When they return to work in a few days, 2NE1 will be resuming their promotional activities in Japan.
Celebrity