Joey Marquez maintains that he'd be a complete gentleman if he bumps into ex-girlfriend Kris Aquino in ABS-CBN. 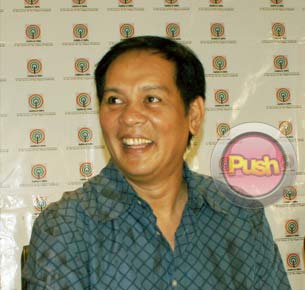 During the press con of Showbiz Inside Report (S.I.R.) last Tuesday night, January 31, Joey Marquez maintained that he would gladly do a one-on-one interview with his ex-flame Kris Aquino should it be given to him as an assignment. “Bakit hindi? Hindi naman ako nagtatago ng kung ano. Ang sa akin naman, we all understand, lahat ng gagawin sa larangan ng trabaho dapat gampanan. Parang doctor, kapag ba magnanakaw hindi mo gagamutin? It’s my job to deliver what is expected of me. Kung papayag yung iinterbyuhin, why not? It would be a big honor for me to interview such an intelligent lady like Kris.”

Joey further explained that people should be mature enough not to make an issue out of his past, albeit controversial, romance with Kris. “Kung kinakailangan [ok lang sa akin mag-guest sa Kris TV]. Kung may fact na talagang dapat [pag-usapan]. Kaya nga ang question dito e, ano ang mauuna itlog o manok? It’s a moot point. Kaya ang masasabi ko, I’m open to everything, in the same manner that I’d like everybody to be open to anything.”

But just in case they bump into each other one of these days, Joey said that he’d definitely say hi to Kris. “Ako naman, ayoko naman pangunahan. Kung magkrus ang landas namin, why not, babati ako. I’d like to be as gentlemanly as I can be.” As it is, he doesn’t want to ruffle anyone’s feathers especially when it concerns women in general. “Ang sa akin, bilang lalaki, whatever the situation is, I have to say ‘thank you, yes or right’. Yun lang dapat. Because society's more forgiving towards men than women, yun lang.”

Asked if he feels pressured to be viewed as a showbiz authority of sorts, Joey explained that he’s more concerned about his role in imparting knowledge to the viewers through the show. “It’s not about being an authority just because I have a background in politics or showbiz. It’s about our competency and how credible are we going to report a certain issue. Kasi ang feeling ko nung kinuha nila ako, not as a star but an ordinary citizen trying to make a living for my family. At the same time, this is an opportunity for me to be part of the learning system of the public. It’s an honor for me. I’d rather be someone who can contribute knowledge to the people than being called a star.”
Celebrity