Christian Bautista will focus on his career in Indonesia in 2013

Christian Bautista is not worried that his local popularity may decline while he concentrates on his career abroad. 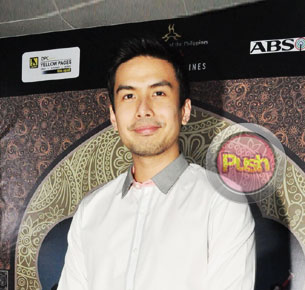 Christian Bautista is proud to have starred in the theater play Rama, Hari opposite Karylle. “[It’s] one of the best shows I’ve ever done. One of the best productions I’ve ever been in. I felt so at home on stage and ang ganda ng musika, ang ganda ng sayaw talaga. One of the highlights of my life,” he enthused.
He said that the challenging part was fixing his schedule to juggle the play and his other commitments. Christian said he is happy that he was able to give the proper emotions, perform the dance steps, and do the right interpretations to the songs by OPM icons Ryan Cayabyab and Basil Valdez.
Christian also smiled when complimented for his undeniable chemistry with Karylle onstage. He shared that he believes that they work well together since they have done stage plays in the past.
With the success of Rama, Hari, Christian shared that he was told by someone that he should do at least one theater play once a year. Though he is open to the idea, he said that he would first consider if the role is worth it and if he could pull it off.
Christian revealed that he would be concentrating on his career in Indonesia in 2013.  “Lots of projects are opening up [in Indonesia], I’m promoting my album in Indonesia,” he confirmed.
He revealed that there is a big chance that he might be away for a while from the country. However, he said that he is not concerned that his popularity will drop in the local scene with his absence. Christian reasoned, “I’ve done it twice. I shot a movie in Indonesia for three months [then] I came back, okay naman. I did The Kitchen Musical for three months as well. I came back [and] okay naman. I think it’s proper management.”
Celebrity