Christian Bautista says he wants to follow the example of his parents and grandparents when it comes to a romantic relationship. 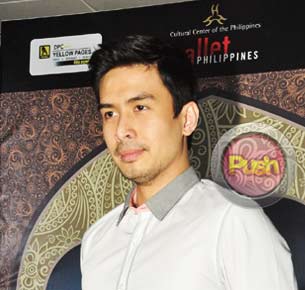 Christian Bautista had an early Christmas gift when he got two awards recently on ASAP; the ASAP 24K Award and the Platinum Circle Award. “Nagpapasalamat po kami sa ASAP for recognizing OPM music,” began the singer-actor. The second award that Christian received was for his latest album, First Class.
He continued, “Thank you for giving me this honor and [to] Universal Records for this. Andami po naming singers na nagkaroon ng recognition and it’s good kasi napapaalala uli sa tao ang ganda ng OPM music.”
Christian was also asked about a recent rumor that he and girlfriend Singaporean actress Carla Dunareanu are already living together under one roof. “Wala lang ‘yan. ‘Yung mga isyu ginagawa lang ‘yan para magkastorya, pero hindi totoo,” he clarified.
Christian also offered his personal take on the subject. “We can have vacation together pero to live together for a long period of time before marriage, siguro ako lang, personally I’d rather not. It’s my personal take para ma-avoid ang mga temptations. May natural flow na gusto kong sundan, merong natural design na gusto kong sundan.”
He continued that he believes in getting married first before moving in with his partner. “Ito ang gusto kong design that was followed by my parents, my grandparents [and] by other people who made it work.” Christian also confirmed that Carla agrees with him on this.
Celebrity