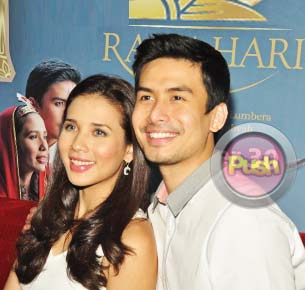 Currently starring in the pop ballet musical Rama Hari which is on a limited run at the Cultural Center of the Philippines, Christian Bautista and Karylle appeared on the December 4 episode of Kris TV to share their sentiments about their newest project together. The two singers previously worked together on series The Kitchen Musical which was aired on Studio 23.
“Rama Hari is the story of Ramayana. It’s the biggest Indian epic na halos sa lahat ng Southeast Asian country ginagawa nila. If you remember before, merong play na Rama at Sita, so that was derived from Rama Hari. Ginawa ni Basil Valdez at Kuh Ledesma dati,” Christian shared.
Karylle admitted she enjoyed collaborating with many different kinds of artists on the show. “Ang maganda sa project na ito, Ballet Philippipnes talaga ang pinakabida, we have all the dancers and meron ding Rama at Sita na counterpart kami, meron ding Manila Symphony Orchestra with Mr. Ryan Cayabyab who wrote the music. Kasama din naman ang UP Concert Chorus. 10 shows lang ito and students get 50% off siyempre,” she told Kris TV host Kris Aquino.
The two talented performers also talked to Kris about how they initially got paired with each other on The Kitchen Musical. Karylle admitted that she had to go through two auditions before she got the role, but Christian was handpicked for his part. “When they saw my profile sa Indonesia and in Southeast Asia, they said that I was good for the role. I was very thankful na pinasok nila ako. I auditioned for Star In A Million. But I had so many failed auditions. Siguro mga less than a hundred na,” he said.
More recently, Karylle said she was happy to make it through the first round of local auditions for Miss Saigon even though she was cut from the second round. “There was an open audition, papasok ka dun, sasabihin mo what part you’re going to sing for them tapos bigla na lang, sasabihin na nila kung pasok ka or hindi sa next callback. Parang rollercoaster talaga. So bumalik ako, nagkaroon ng deliberation tapos hindi na nila ako na-callback pero okay naman din. The thing is, kasama sa panel yung Pilipinong si Mr. Dong Alegre. He was sweet enough to say, ‘I’ll speak with you after this just to explain to you what really happened.’ Pero masaya talaga and it was really thrilling,” she said.
Apart from the challenge of doing auditions before finally making a name for themselves in the industry, Kris also asked the two to share one of the most challenging times in their lives. Christian admitted that there was a recent health scare in his family. “There was one time last year when we found out that my mother developed breast cancer. That was very hard for us as a family. She’s doing medication. She never had chemo. She’s strong. Early detection. Why? It’s because of simple yearly check-up. So now she’s okay,” he said.
For Karylle, finding forgiveness in her heart after her parent’s separation was a big trial for her. “I specifically remember one breakthrough point for me was when tito Dolphy got sick and I started praying for him. But even then, it was a long, long journey. I was still young. Because no one ever talked to me about it. Not my mom, not my dad. It was a solo journey but I did find people along the way who did help me. I had family healing, I had Bethesda, minsan nag-ma-mass kami, iiyak ako dun mag-isa. I think what they say about forgiveness is it starts in your head. It’s a decision that you make and it goes down to your heart and it takes a long time,” she admitted.
For more updates on Kapamilya news, log on daily to Push.com.ph and follow @Push_Mina on Twitter.
Celebrity