Richard Yap shares what makes him successful even in his forties and how he feels about inspiring viewers via 'Be Careful With My Heart.' 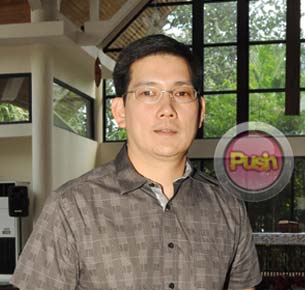 Businessman-turned-actor Richard Yap officially went full time in show business when his resignation as a consultant at a furniture company took effect by the end of October this year. Although it was tough to part ways with a company where he worked for 22 years, his boss was very supportive of his career move given his success as an actor. “For now, I’ve finally decided to make this full-time. I’ll give it two years. Since I am here, I’ll try to do my best. And kung meron chance to do other investments, pwede naman gawin yun on the side,” Richard said in an exclusive interview with The Buzz Magazine (December issue).

A relative newcomer to showbiz, Richard became a household name when he played the role as Papa Chen in My Binondo Girl. He further proved his mass appeal when his role as Sir Chief in Be Careful With My Heart also became a big hit among Kapamilya viewers. When asked about the key to his success, Richard shared that it’s never too late to learn new skills even at the age of 45 years old.

“We should not close our minds to other possibilities. Like acting, it was a new possibility for me. So I learned how to act, I did workshops, I learn from other people. Hindi pwede yung, ‘Ah alam ko na ‘yan!’ You should be open to criticisms. You shouldn’t let success or fame get into your head. Humility is a trait you should always cultivate.”

It was all worth the hard work though especially now that Be Careful With My Heart has been extended until June of next year. “I was a bit surprised actually kasi we were expecting until first quarter of next year. It’s a good surprise for us,” he added in a recent interview with Push.com.ph.

More than anything, Richard feels blessed because of all the viewers who keep giving positive feedback about the show. “We wanted to show our appreciation not only to the supporters, but also to God above. It’s such a blessing to be an inspiration to all the people watching us. We cannot always help people financially, but helping them emotionally and spiritually, that’s the best thing that we can give.”

Check out The Buzz Magazine December issue for more revelations about Richard Yap a.k.a. Sir Chief.

And keep logging on to Push.com.ph for the latest news about your favorite Kapamilya stars or follow @Push_Mina on Twitter.
Celebrity