Anne Curtis shares why 2012 will always be an unforgettable year for her. 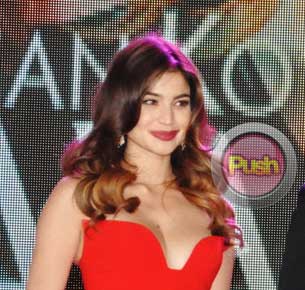 As one of the top female celebrity endorsers in the country, Anne Curtis admitted that 2012 was definitely a banner year for her in terms of her career. “My gosh, it was an amazing year from my concert in Araneta to winning my best actress award for the FAMAS, from doing my first out-of-the-country concert na Annebisyosa, doing A Secret Affair that did so well at the box-office so grabe, grabe talaga itong taon na ito. Even the Anak TV awards nakahabol pa. You know it’s just been such an amazing and a blessed year,” she shared.
As early as now, Anne couldn’t contain her excitement over her newest acting project. “I’m really looking forward to Kailangan Ko’y Ikaw. Of course the teleserye with Ate Kris (Aquino) and Sir Robin Padilla. We’re very, very excited for it to come out in 2013 so abangan nila yan,” she added.
One of the best lessons Anne learned this year was something she said she can apply to both her personal and professional life. “It would have to be learning how to be patient. I think that’s one of the most important things that I learned,” she admitted.
The 24-year-old also revealed that her gift to herself and her loved ones for the holidays was a well-deserved vacation. “Ito yung big trip with my family. We’ll be abroad for Christmas and New Year. Yun talaga yung vacation namin so I’ll be gone for that period,” she said.
For her personal goals, Anne said she hopes to get to see more of the world next year as well. “There are a lot of countries that I haven’t been to yet so I definitely want to see Greece, I want to see other parts of Australia that I haven’t been to and I’d also like to see a lot of places in the Philippines. I want to see Batanes, what else, there are so many places kasi I haven’t even been to like Amanpulo. Alam mo yung ang dami pang places in the Philippines that I haven’t been to. So I’ve been starting na tina-try kong puntahan if I have time, basta somewhere in the Philippines,” she shared.
When asked what else she hopes to achieve for 2013, the Annebisyosa star immediately answered, “Tuloy-tuloy na world tour! (laughs).” Apart from a new show, a successful noontime variety program, and numerous endorsements, is there anything else her fans can expect from her in the coming months? “We shall see, we shall see. I’m just very excited for what 2013 has in store for us!” she said.
For more Kapamilya updates, log on daily to Push.com.ph and follow @Push_Mina on Twitter.
Celebrity