Albie Casiño on rumored girlfriend Dawn Balagot: 'I am enjoying her company'

Albie Casiño shares that he learned to be more careful in handling his love life this time around. 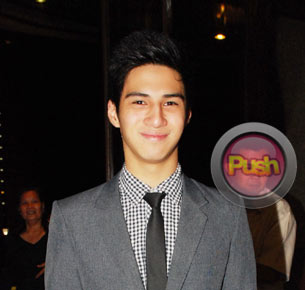 After all the controversies he encountered for the past few years, Albie Casiño maintained that he would rather focus on the bright future ahead of him than dwell on the bad things that happened to him. In fact, he was very optimistic when Push.com.ph and other entertainment reporters caught up with him during the 2012 Metro Manila Film Festival assembly at the Hotel H20 last December 23.
"Hindi naman [lahat ng nangyari negative] at least now I get to finish college.  I am currently in first year college studying Export Management," adding that he has no regrets even though his showbiz career was stalled because of the scandal involving his ex-girlfriend Andi Eigenmann.
If there's anything he learned from that ordeal, the star of Shake Rattle, and Roll XIV said that he became more mature and responsible with his actions. "I just learned to be more careful with everything you do. Pagiisipan mo talaga lahat ng gagawin mo. You can't just do something without thinking. Yes, [I learned to be more careful in handling matters of the heart]."
Nevertheless, Albie didn't deny that he has moved on with his life and has started dating showbiz newcomer Dawn Balagot. The two have been an item since mid-2012; but the young actor refused to say what’s the real score between them despite photos of the couple circulating on the internet. "Uhm... Hahaha! I'm taking it one step at a time. She's great. We did an indie film together, The Animals."
When asked if they're officially a couple, Albie simply replied, "Siya na lang tanungin niyo. [But] yeah, I am enjoying her company."
Celebrity