Jessy Mendiola on her love life: 'I'm not heartbroken or anything'

Jessy Mendiola shares what she wishes for her heart for the New Year. 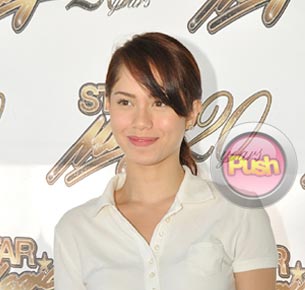 After being part of a string of successful Kapamilya series like Budoy and Precious Hearts Romance Presents: Paraiso as well as the upcoming Primetime Bida series Against All Odds, Jessy Mendiola said she was very happy about 2012. “My career was full of blessings. I mean until now and I just cant wait for next year kasi sobrang blessed ako this year and I’m really thankful for the people around me, for the management, especially God kasi it just hit me, this year was really amazing. I mean there were ups and downs. I had my first movie this year, I had Paraiso, so I’m really happy this year. I think that’s the highlight of my year,” she told Push.com.ph.
Jessy admitted she enjoys her role as the headstrong and independent Yanni in the afternoon series Paraiso and shared her favorite scene with co-star Matteo Guidicelli. “It was when Matteo and I were really having a hard time taping our island scenes. I was crying kasi it was really hot and imagine we were barefoot sa island. It was really hot tapos I got scared because of the yung mga maliliit na kahoy, yung talahib and everything. So I was really crying. Para siyang Amazing Race, parang ganun,” she said.
The 20-year-old mestiza said fans can expect more exciting twists from the show next year as well. “Well our characters will see each other again. Kasi di ba for a time, Yanni and Brennan weren’t seeing each other anymore after the island? Now, their paths crossed so right now parang they’re still stopping their emotions, parang pinipigilan niya. And there are new characters coming in and there’s change in Matt Evans’s character. He’s going to change. Matteo is going to be torn between Megan and Yanni then someone new is coming in. so it’s very complicated,” she said.
After exclusively dating then parting ways with Angelito actor JM De Guzman earlier this year, Jessy said she just wants to take care of her heart right now. “Well I wish that I would have peace and for my heart, it’s still working. I mean I’m not heartbroken or anything. I just want it to be safe and secure. So that’s my wish for my heart,” she said. The talented actress said she is aware of the news surrounding JM and although she keeps her distance from such issues, she still wishes him nothing but the best in life.
“Well of course I get affected by it, I mean by them, by the people who are linked to me and for me, I don’t think that’s their fault. I think they’re just trying to share their emotions or feelings to everyone. It’s just that given the situation and the circumstances, I don’t think I’m ready for it yet and I know naman who you are pertaining to and for him, I really wish him a very merry Christmas and a happy new year,” she explained.
For the holidays, Jessy revealed that her only gift to herself is time to relax. “I want a vacation because I never really had a vacation this year. But I’m really happy because of my blessings in my career. If out of the country gusto ko nga sa Spain eh. Hindi pa rin kasi natutuloy. Siguro kung dito lang sa Philippines, sa beach siguro ulit. Kahit three days lang. Gusto ko talaga magpa-tan (laughs),” she shared.
For more Kapamilya updates, log on daily to Push.com.ph and follow @Push_Mina on Twitter.
Celebrity