Sharon Cuneta on Piolo Piolo Pascual and his fans: 'I will leave them alone as long as they leave us

Sharon Cuneta retaliates against her online bashers once again; believes that the whole thing is somehow connected to KC Concepcion and Piolo Pascual's breakup. 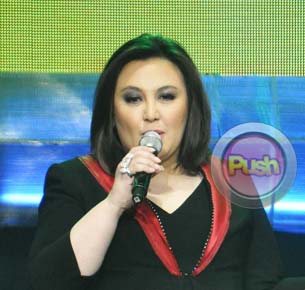 A misunderstanding of sorts caused Sharon Cuneta to engage in a Twitter war yet again. It all started when online user @bea090790 assumed that the Megastar was pertaining to her daughter KC Concepcion's ex-boyfriend Piolo Pascual in one of her tweets. This led her to post the following statement: "Guys, did I tweet anything at all about Piolo Pascual? Someone who hasn't moved on is accusing me na naman! ‘RT @bea090790: @sharon_cuneta12 is that for papa p..anu ba yab mooovvvee oonnn..’"
A few other bashers tweeted demeaning insults for Sharon, obviously to get a rise out of her. Instead of keeping her calm though, she went on the defensive and proceeded to post her opinion about the whole Piolo-KC breakup, in an effort to clear her daughter's name.
"@bea090790 basahin mo sana muna ang tweets ko. Wala na kaming kapaki-paki sa idol nyo at nananahimik na kami. Kayo naman ang bastos nyo... You guys flatter yourselves too much! @merly_sharonian"
" @Wayne4Emma don't push me. Ang tagal na namin ni kiko (husband Francis Pangilinan) at kc gusto sabihin lahat. At ipakita ang text msgs ni piolo mo at ng isa pang tao na sinave lahat ni kc. OKAY? Have a nice life! Magsama-sama kayong maglambada. Chaka labada."
“@gabsconcepcion Hey!! The fans of our baby's ex are at it again! I feel I cannot keep my silence any longer! You?" This was addressed to Gabby Concepcion, KC’s father.
@jemkadoodles supeeeeeeeeeer bait kaming lahat!!!!! Pero punong-punong puno na ako!!!!! Akala nila basta lang namin papalampasin to? Matapos ko payagan na i-edit ang interview ni KC sa the buzz noon?!!! Abuso naman pala mga bastos sila eh! Sorry pasensyahan na lang. At pag nagsalita kami, PIOLO, DAHIL SA FANS MO!!!!!!
Sharon admitted, however, that she was made aware by some of her well-meaning fans that not all her online bashers are Piolo's fans; that they might be fans of other female celebrities who just want to create negative publicity for KC, which is unfair for Piolo who has kept his silence all this time. But it seems that Sharon is annoyed by the fact that the actor has not even defended KC for all that happened.
"@mars_dave WALANG HUMINGI NG TAWAD KAHIT KANINO SA BUONG PAMILYA NAMIN.”
"@jemkadoodles ito naman si KC nagpipigil pa eh! Pakita mo na phone mo kaya anak? Nang matapos na. Sila, hindi tayo. @kc_concepcion"
"@rumbydabay wala rin naman sya ginawa ever para ipagtanggol ang anak ko o humarap sa amin. Mga bastos talaga"
Since her heated tweets early last November 2, The Megastar has apologized to solid Sharonians for "making patol" to her bashers, adding that she can't just allow anyone to say bad things about her or any member of her family. This, in spite of other people's constant reminders for her to just ignore malicious tweets.
"And in the end, what will matter to me is that my children will know that when no one who was supposed to be protecting them did so, their Mama risked irking the ire of even her most ardent supporters, in order to fight for them & our name… I will always protect KC… and though it is tempting to just blurt out what really happened that caused her the most pain in her relatively short life & caused her to cry probably a swimming pool of tears, because of her wishes that we try our best to keep our silence, I will leave them alone as long as they leave us alone…"
KC on the other hand hasn't mentioned anything about this issue on her Twitter as she is still currently on her European vacation.
Celebrity