Paulo Avelino wants to be known for great performances

Paulo Avelino says all that he wants is to do his best in every role entrusted to him. 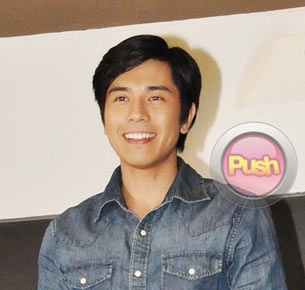 After his notable performance in the top-rating teleserye Walang Hanggan, Paulo Avelino is now keeping himself busy with the Metro Manila Film Fest entry Shake, Rattle & Roll XIV. Paulo will be starring in one episode of the three-part movie where he portrays a member of a group of scout rangers hunting down a group of rebels who later discovers them dead in their secret camp. The group then sets out to find the mass murderer.
In the said episode, Paulo is reunited with his former colleagues Dennis Trillo and Mart Escudero, who used to be under one TV network. “Masaya. Kumbaga maingay lang kami sa set. Kwentuhan, ayun nagbalik lang lahat ng alaala namin,” related the actor.
When asked if his co-actors teased him about his newly acquired fame, Paulo just smiled and replied that they didn’t talk too much about work and that they just tried to catch up with each other.
Having done such a good job with his kontrabida role in Walang Hanggan, Paulo was asked if he didn’t have a hard time switching to another role. He answered that it didn’t feel difficult at all as it has always been his objective to try different roles. “’Yun naman ang gusto kong gawin. I don’t want to be stuck in one character. Kumbaga may bagong oportunidad na mag-portray ng bagong karakter, gagawin ko,” he explained. As for his dream roles, Paulo said that he wants to play a serial killer.
Apart from Shake, Rattle, & Roll XIV, Paulo mentioned that he will do another film under Regal Films, which is a romantic-comedy. He added that he will also star in a Cinemalaya entry.
With back-to-back projects, Paulo said he tries his best not to let the pressure get the best of him. He continued that all he wants to do is portray each character really well.
When Push.com.ph asked him if he is set on getting an acting award for his performances, Paulo answered, “For me I’m not really vying for awards, but I just want to do great films; magagandang teleserye, magagandang pelikula. Para sa akin masaya na ako pag kampante ako sa sarili ko… I’m very proud sa film na ginawa namin as a whole.”
Celebrity