Bea Alonzo and Zanjoe Marudo share why it would be a challenge for them to make a movie. 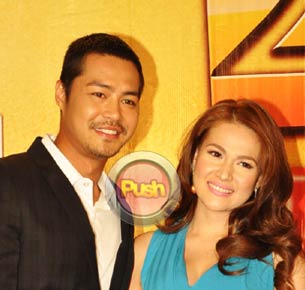 As part of the ensemble cast of Star Cinema’s 24/7 In Love, Bea Alonzo and Zanjoe Marudo portray the roles of Belle and her longtime best guy friend-turned-gay Butch. The two work and live together until Belle finds out that Butch plans to study fashion abroad. She finally admits to herself that she is in love with him and tries her best to get him to stay.
Zanjoe is impressive in his role as the conflicted best friend who is torn between disappointing his best friend and pursuing his dreams abroad. Bea admits that she did not expect her real-life beau to play a gay role so convincingly. “Nagduda na ako bigla sa kanya. Ang galing galing niya. Joke lang (laughs),” she said during the 24/7 In Love premiere last November 19 at SM Megamall.
Although he has never had any hesitations when it comes to portraying gender-sensitive characters, Zanjoe said he was also surprised by how his character came out on the big screen. “Siyempre nakakatuwa na sinusuportahan kami at yung 20th anniversary ng Star Magic. Sa role tawang tawa ako. Ay hindi, diring-diri ako dun! (laughs),” he joked.
The couple also admitted they felt thrilled to be part of the cast which  includes Star Magic’s top talents like Piolo Pascual, Sam Milby, Pokwang, Kim Chiu, Gerald Anderson, Maja Salvador, Diether Ocampo, John Lloyd Cruz, Angelica Panganiban, Xyriel Manabat, and Zaijian Jaranilla. “Parang siyang isang malaking reunion.” Bea said.
Zanjoe admitted that he might have had some reservations about working with Bea. “Mahirap yun, mahirap yun (laughs). Hindi ko iniisip eh, hindi pumapasok sa isip ko yun pero depende eh,” he said.
Bea, on the other hand, was more open to the possibility of them working again together in the future. “Siguro mas lalong magiging weird for both of us yung pakikipagtrabaho sa ka-relasyon namin except for this one na mabilis lang at hindi naman siya ganun kabigat na project. Pero siguro kung merong magandang storya na darating sa amin, para sa akin, why not? I really don’t know it depends on the material talaga,” she explained.
Although they have chosen to keep a low profile when it comes to their relationship, Bea and Zanjoe don’t seem to mind sharing some kilig moments with the media every once in a while. During the 24/7 In Love after party, after being asked whether he prefers to do comedy or drama, a playful Zanjoe answered, “Hindi ko alam eh. Siguro fantasy (laughs),” he said. Then when Bea asked him why he chose that genre, the actor turned to her and said, “Kasi ikaw ang pantasya ko,” he said with a smile.
Catch Bea Alonzo and Zanjoe Marudo in Star Cinema’s 24/7 In Love, the 20th anniversary offering of Star Magic, now showing in theaters nationwide. For the hottest Kapamilya updates, log on daily to Push.com.ph and follow @Push_Mina on Twitter.
Celebrity