Jake Cuenca wants his next relationship to be for keeps

Jake Cuenca says he is still in the process of discovering things about himself. 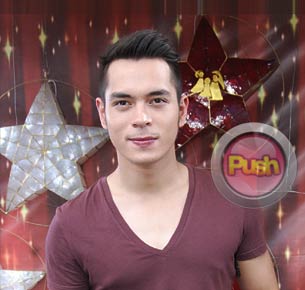 Jake Cuenca shared that shooting for his next movie with Lovi Poe will be starting in a few days. The two have been romantically linked ever since they did their first movie together, although they never admitted that they ever became an item. In an interview, the actor revealed that he still continues to keep in touch with Lovi and he is excited to work with her again.
Asked if there is any truth to claims that Lovi is back in the arms of her former boyfriend, Ronald Singson, Jake immediately replied, “Just ask her about those things na lang kasi ako naman I don’t want to talk [on] anyone’s behalf. Kung ganon lang ang tanong it’s better na manggaling na lang kay Lovi,” he said.
He was then prodded if he is the type who is willing to sacrifice his own happiness for the sake of his loved one’s happiness. “Oo naman. Ako naman I think everyone deserves to be happy,” replied Jake. “Everyone in life deserves to be happy. Ako ang unang taong magsasabing dun ka kung saan ka masaya and kahit kanino naman.” He continued that he was taught by his family to search for his own happiness, but make sure that he won’t hurt anyone in the process.
Jake never denied that he considers Lovi special and that he loves her, but it seems that committing to a relationship is something that he is not yet ready for. “I’ve been into so many relationships, I hate to say it pero lahat ng relationships na ‘yon nag-fail,” he related. “I did not regret any of my relationships pero I’m in the same process of getting to know myself pa rin. By the time I can [already commit again], I assure you guys pag ako nag-commit ulit ‘yun na ‘yon, feeling ko ‘yun na ‘yon.”
When Jake was asked if Lovi is also taking it easy when it comes to making a commitment, he answered, “Again I don’t want to answer on her behalf pero basta she’s very busy. We’re both very, very busy.”
Jake’s afternoon soap opera with Shaina Magdayao, Kung Ako’y Iiwan Mo, recently ended so he is now focused on the primetime teleserye Kahit Puso’y Masugatan. Jake is one of the very few actors who is able to work on two teleseryes at the same time. Nevertheless, Jake prefers not to do that again because of the demands of doing two series at the same time.
“Sa totoo lang nung natapos ang taping ng Kung Ako’y Iiwan Mo dun bumigay ‘yung katawan ko. Pero di ako pinayagan ng katawan ko na bumigay [while still doing both]. Tsaka I was challenged to do it. I want to be the first one to do it. And it’s a good experience and I think I’m a better actor because of it.”
Celebrity