Is it happily ever after for 'Daniel and Katerina?'

A sneak peek at 'Walang Hanggan's' most awaited episode. 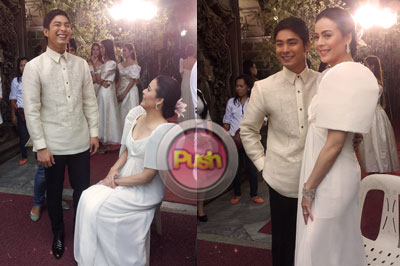 The sun was definitely shining on the day of the much-awaited wedding of Primetime TV’s beloved couple, Daniel and Katerina. On the set, the bride was very beautiful as she alighted her horse-drawn carriage while the groom nervously talked to his mother inside the church. Everyone came in white to celebrate, even Thomas was present to give away his sister. The big question now is, could this really be happily ever after for Daniel and Katerina?
Coco Martin and Julia Montes, who play Daniel and Katerina respectively, were all smiles despite the early call time of the cast and crew of Walang Hanggan at the San Agustin Church in Manila. Dawn Zulueta and Richard Gomez were also the epitome of very proud parents as they took their places for primetime’s wedding of the year. Everything looks perfect as the teleserye counts down to its last 18 days.
Stay glued to ABS-CBN’s top rating teleserye nightly right after Princess and I.