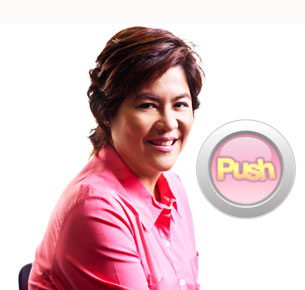 In Star Cinema’s Filipino-Thai film Suddenly It’s Magic, multi-awarded movie and TV director Rory Quintos worked with her Maria la Del Barrio star Erich Gonzales and Thai heartthrob Mario Maurer. The talented director said she was satisfied with the dedication that both actors showed during the project and admitted she was impressed with Mario’s talent. “Magaling siyang artista. He’s very subtle, but he really studies his script. He’s very professional at ang gusto ko sa kanya, he gives his input, he asks if he can do this or do that. So it’s nice to work with him and when you explain to him, nakikita mo na naiintindihan niya kaagad. The other actors kasi you need to explain in detail. Siya konting explanation lang na-ge-gets na niya agad eh. So mahusay siya,” she admitted.
Direk Rory also said that Filipinas won’t find it hard to fall in love with Mario onscreen. “What struck me the most was he seemed to be such a nice boy and he is really cute. I think women of all generations would appreciate how cute he is and you’ll actually see in his eyes that he is a good person,” she added.
After directing her last year in Maria la Del Barrio, direk Rory admitted she also enjoyed working with Erich again in Suddenly It’s Magic. “Erich is very young and a very good actress. Marami pa siyang magagawa in the future. I have no doubt that in the future she will bring awards ata ng layo-layo pa ng mararating niya sa buhay,” she said.
The film, which is a modern-day fairytale between a popular Thai actor Marcus (played by Mario) and a simple Filipina baker Joey (Erich Gonzales) who are both in pursuit of their respective happiness. “The movie is really about unconditional love. It’s about learning to let go and set free the person you love so that he or she could fulfill his or her greatest potential. So when he or she comes back to you, you will really be loved,” she explains.
More than just being a romantic comedy, direk Rory said the film also imparts good family values. “Because we were conscious that the concept that the Thais chose was kind of formula on the surface, we kind of made sure in Star Cinema that there would be added depth to it so that it’s not just a usual formula movie. And in that depth we’re really talking about love and there are many lessons that will be learned and that each of the characters will have their own journey. So that even though it looks light sa trailer, pag napanuod nila, mas masasabi nila na may lalim pala,” she added.
Aside from the fiesta and bayanihan scenes, direk Rory says the film will also show the audience what Pinoys are truly like. “Aside from that we showed that Filipinos like to have fun. When you’re together, when you’re problematic, masaya pa rin and that we really support each other no matter what. We get together to try and support that person, it’s really about the Filipino relationships with each other and how we are all there for each other,” she said.
Direk said she appreciated the effort the Pinoy cast and crew went through to make the Thai members of the film feel comfortable while they were shooting in Ilocos. “I have to credit all of them for showing Filipino hospitality and I think that’s one thing that the Thais appreciated very much. Kasi siyempre ako natataranta sa set dhail 12 hours lang [working hours nila] so I really told them early on na sila ang mag-entertain at sila na ang bahala kay Mario and his whole team kasi ako as a director wala akong time. They were very, very touched kasi we were there in Ilocos for a long time. Itong other members of the cast na si Ces (Quesada) at si Dinkee (Doo) who went home to Manila kasi they didn’t have any scenes, pag balik nila may mga pasalubong sila from Manila! So the Thais were so touched na ganun. So to their credit, they showed them what Filipino hospitality was about. After that, sila pag uwi sa Thailand pagbalik dito may pasalubong na din para sa amin,” she recalled.
Catch Suddenly It’s Magic as it hits theaters nationwide starting on October 31, 2012. For more updates about the movie, visit StarCinema.com.ph. For the hottest Kapamilya news, log on daily to Push.com.ph and follow @Push_Mina on Twitter.
Celebrity