Zac Efron is overwhelmed by the Pinoys' warmth at his fan con: 'I love the Philippines!'

Zac Efron takes time to get up close and personal with some of his die-hard fans during his Penshoppe fan conference. 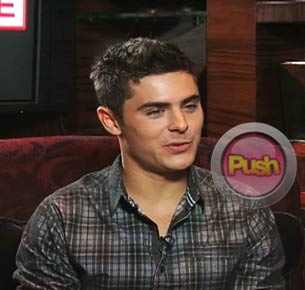 Hollywood star Zac Efron was amazed by the Filipinos’ warmth and all-out support as over ten thousand fans flocked to his Penshoppe fan conference held at Mall of Asia Arena last September 28. He was further surprised when the audience started singing his High School Musical hit song “Start of Something New.” A hundred lucky fans who won the electronic raffle draw were allowed to join the meet and greet portion. But Zac proved to be really accommodating as he invited a couple more from the audience to get up close with him after the program proper.
“You’re awesome! I love being out here. I think there are certain things about being famous. It has taught me to really appreciate my family above all things; and that the most important thing in the world is your fans. That’s why it’s so nice to come out here. You’re the only good thing about fame, all of you.”
The country’s King of Talk Boy Abunda also joined him on stage for the Q&A portion and Zac happily shared some of his best experiences while shooting High School Musical, Hairspray, and The Lucky One. The former teen star didn’t expect that he’d manage to break the mold after doing the High School Musical movie franchise for three consecutive years.  “[The transition] was very hard. During our last taping, we were all crying, we were all so emotional. But who knows what the future holds?”
True enough, he did a good portrayal of the strong-silent type, a former military man in the Nicholas Sparks movie adaptation The Lucky One. When Boy asked him how he handled his steamy love scene with Taylor Schilling, Zac replied, “It wasn’t difficult. We wanted to make it as real as possible. So we sort of made it real… It’s awkward talking about it. My favorite line is the movie? ‘You should be kissed every day, every hour, every minute.’ I think I like that one.”
But for his first real-life kiss, Zac gladly shared that it happened when he was just a young boy. “I was in first grade. And I think we were playing spin the bottle or truth or dare. I was with a couple of my close girl friends and here was one girl I really like. We had lit some candles, it was kind of romantic. I spun the bottle perfectly and we kissed. It was awesome,” he beamed.
Celebrity