Derek Ramsay says the non-showbiz girl he's dating is 'somebody I am very interested in.' 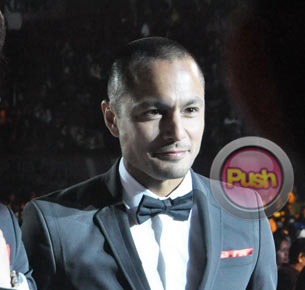 For the first time since he started dating again, Derek Ramsay revealed a few details about the non-showbiz girl who’s often seen in his company. Although they’re not in a relationship yet, the hunky actor admitted that he’d like to have the chance to travel around with her. “I am very happy. I’m taking my time. But she's definitely somebody I am very interested in. She’s into sports. Although she hasn’t traveled that much so I’ll see if I can get her to see the world like I have. I love that kind of girl,” he said in an interview with Push.com.ph.
One thing that captivated Derek about this mystery girl is that she’s the type who’s not conscious about her looks every time she plays Frisbee. She’s into surfing as well, which makes her a good match for Derek who loves sports and adventures. “It’s not her beautiful features that attracted me to her. When it comes to sports, para siyang walang pakialam katulad ko. Na kahit nasa ilalim siya ng araw hindi nagsa-sunblock. Walang kakikay-kakikay. Hindi siya part ng Philippine team pero maybe one day makapaglaro siya ng Philippine team ng Frisbee. Magaling siya,” he added.
When asked if it’s easier for him to be with someone with whom he has a common interest, Derek simply replied, “I don’t know if it’s easier. It’s definitely a bonus if you share something you’re both passionate about. For me, it doesn’t have to be fine dining and wine and all that. Mas okay pa nga na we both go out in the field, pick up a ball around, toss a Frisbee…”
But he was also honest enough to say that falling in love is far from his mind right now. Apparently, the girl just came out of a relationship as well. “When will I know if it’s love? Love is a very complicated thing. Let’s not use it. Love is a very good thing but sometimes it’s abused. Nakakalimutan natin ang true definition of love because of [merely wanting the idea] of being in love. Wala pa, we’re both taking our time. She just got out of a relationship, I just got out of a relationship. But it’s been almost a year. How many months? Wala pa naman... I’m not counting,” said Derek who was referring to his breakup with Angelica Panganiban.
All he knows for now is that he wants to keep his love life away from the limelight as much as possible. “I don’t know [the status of our relationship]. I don’t want to put any labels as of now. Naks, parang movie. But what I can do is to make her happy. She’s very happy with me.”
Celebrity