Xian Lim signs a three-picture contract, including one with Kim Chiu

Xian Lim is very thankful that his career has really taken off with 'My Binondo Girl.' 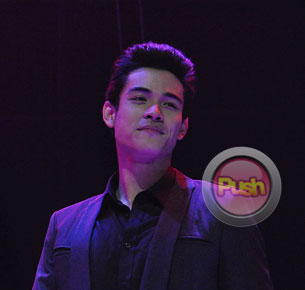 Xian Lim signed a two-year three-picture contract with Star Cinema on January 5. The star of My Binondo Girl said that the deal is a dream come true for him. “I’m really excited because I’ve been waiting for so long para dito and finally it’s here. When I walked in here [for the contract signing] sabi ko ito na ‘yon,” he related.

Xian has already started work on the first movie included in the deal, My Cactus Heart, with Maja Salvador and Matteo Guidicelli. The three are also part of the prime time teleserye, My Binondo Girl.

Xian revealed that another movie lined up has him starring with Kim Chiu. The actor’s team-up with Kim in My Binondo Girl has become very popular and has earned a huge following. He continued that he is not sure if the said movie with Kim will happen this 2012, although he is hoping that it would. His third movie is tentatively titled Reunion, but Xian was not yet aware about the other actors who will be part of the film.

Xian’s role as Andy Wu, Kim’s love interest in My Binondo Girl, has really established him as leading man material. “It feels good. Nakaka-happy, sobra ang feeling na ganon. All the hard work is paying off from all the shows na ibinigay, nagbubunga, so grabe. It’s an exciting feeling. I’ve always wanted it. So ‘yung feeling na parang you’ve finally achieved what you’ve wanted,” he shared.