Anne Curtis's says the secret to success is to 'Keep the faith, have patience'

After 15 years in the business and a lot of patience, Anne Curtis is finally on top of her game. 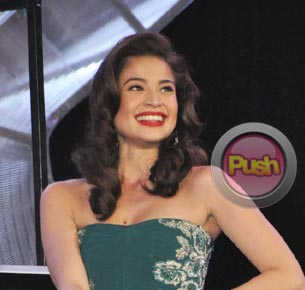 With her notable career highlights last 2011, Anne Curtis is no doubt one of the most successful artists of the previous year. She had a box office hit movie (No Other Woman), a debut album that has gone platinum, a hit TV show (Showtime) and numerous endorsements. She is also the most followed Filipino celebrity on Twitter with over two million followers.

Anne said that all she has done to achieve all this success is to be true to herself and enjoy whatever it is she is doing. “Sobrang happy ako and I feel so blessed and lalo mong naa-appreciate lahat ng pinagtatrabahuan mo when people start to appreciate what you’re doing, like album, bumibili naman sila [so] may sense of achievement ka. More than anything, you can’t help but feel thankful sa lahat ng mga taong sumuporta, maging anuman ‘yung pinasok ko this year.”

Success did not come instantly for Anne though (She joined showbiz 15 years ago in 1997). She had to wait for the right time and the right projects for her to shine. “Patience… have patience. Huwag kang masyadong atat,” she said in an interview with The Buzz last January 1.

She added that her optimistic attitude also plays an important role in getting to where she is now. “Anything goes naman ako, eh. Kung ano man, go lang ng go ‘di ba? I don’t like planning. I just like to live life to the fullest and just enjoy each day as it passes by. You just really have to keep the faith, have patience, keep the faith.”

Aside from her first major concert, which she will be staging in The Big Dome this coming January 28, Anne is also slated to do a teleserye with Kris Aquino within the year.
Celebrity