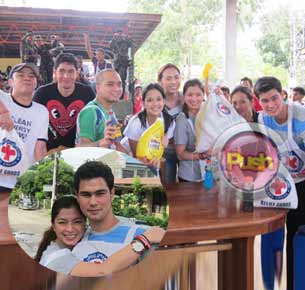 In a recent Push.com.ph poll, Angel Locsin and Phil Younghusband were voted as the favorite real-life couple of 2011, beating Maja Salvador-Matteo Guidicelli, Bea Alonzo-Zanjoe Marudo, and Cristine Reyes-Rayver Cruz. Although they have yet to make their relationship official, a lot of people feel inspired with the way they show their support and affection for each other. Angel often watches Phil’s football games while the Azkals’ striker has made the effort to be involved with the actress’s outreach projects.

The two recently spearheaded a Red Cross relief operation for the victims of Typhoon Sendong in Cagayan de Oro and in Iligan City from December 26 to 27, 2011 without media coverage. Other celebrities who joined them included Maxene Magalona, Chito Miranda, and Victor Basa. They helped with the repacking and distribution of goods such as water jugs, assorted kitchen utensils, and food. They also brought joy to their chosen beneficiaries by interacting with them.

Even though it was Christmas time, Angel actively raised funds by collecting donations from her own endorsements and showbiz friends like Kris Aquino, Star Cinema Head Malou Santos, Iza Calzado, and Victor among others. As stated on her Twitter account, she also mentioned Phil in the list of people who generously extended their help to the Typhoon Sendong victims.

In the meantime, Angel is set to resume shooting her upcoming movie Unofficially Yours today with co-star John Lloyd Cruz. (Photo courtesy of https://www.divinemlee.com)
Celebrity