Piolo Pascual: '2011 has been my most challenging year' 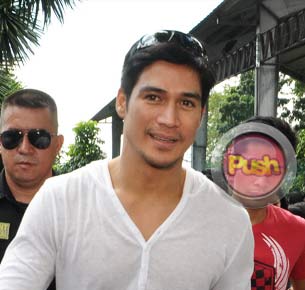 Despite the controversies following his breakup with KC Concepcion, Piolo Pascual chose to respect what his ex-girlfriend said about their relationship rather than make things worse by talking about it in public. “It's been my most challenging year, but you know, you count all the blessings,” he said in a taped interview aired on The Buzz last Sunday, January 1.

Although there has been a lot of negative publicity about him lately, the dashing actor claimed that there are more reasons for him to be grateful. “I am thankful to the year that was and I'm looking forward to another year. You never draw on the negative things. We live through another year. We just look ahead. We think positively about everything.”

If anything, Piolo expressed his gratitude to all those who stood by him through thick and thin. “I’m just thankful for all the support that I’m getting. Thank you sa panibagong taon. Let’s look ahead. Maging masaya tayo sa taong ito. I think the most important for us is to check our hearts if it's in place and to keep the faith.

In the meantime, Piolo is busy taping episodes for his upcoming teleserye, Padre de Pamilya, together with Jericho Rosales and Christopher de Leon. “I’m good. I’m concentrating on the soap that I’m doing. It’ll be showing soon. I’m excited. I had to cancel my Valentine’s show because madugo yung taping. So I have to concentrate first sa TV.”

Aside from his acting, he’s also determined to continue producing movies under his own production outfit, Spring Films. “Yes, we have a movie coming soon. Kimmy Dora Part 2 (starring Eugene Domingo) is shooting already and we have a movie here in ABS-CBN and another movie outside. Iniisip pa namin kung ano ang ipa-prioritize namin sa Spring Films because madaming naka-line up [na projects].”
Celebrity