KC Concepcion is happy to go back to her first love

The X-Factor Philippines host admits she is excited to be part of the reality singing competition. 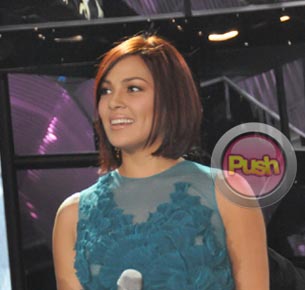 KC says that as far as the show is concerned, she will just concentrate on her hosting duties and not be performing as a recording talent. “”Ibibigay ko na lang yun sa mga contestants natin kasi this is their time talaga to show what they have kasi minsan tinitingnan nation yung isang tao. Hindi mo alam kung may x-factor siya pero biglang pag nag-perform andun pala,” she says. When asked if there was any chance her ex-boyfriend Piolo Pascual would be guesting on the show, the pretty mestiza takes it in stride and with a smile. “Kung lumabas siya eh di very good. Kung hindi eh di oh well marami tayong contestants (laughs).” But the talented host refuses to give a more detailed answer when asked to comment about her love life. “Marami na kayong alam sa mga ex-factor (laughs),” she adds.

This year, KC says that aside from being busy travelling to different provinces for the X-Factor Philippines auditions, she is also looking forward to other exciting showbiz commitments. “I don’t know what I’m allowed to say but siyempre I’m part of Alta, yung teleserye ko with Angelica Panganiban and Gretchen Barretto. Yun masaya ako kasi mga girls kami dun eh. Tapos kasama rin namin sila Zanjoe Marudo, Luis Manzano at saka si Diether Ocampo. It’s a different soap for me kasi matagal rin akong hindi nakakapag-soap. I don’t do it regularly so now is my time to do another soap and I’m doing a movie and i’ll also be on ASAP every Sunday,” she shares with Push.com.ph.