'My Cactus Heart' shows that the real life couple Maja Salvador and Matteo Guidicelli have great chemistry onscreen as well. 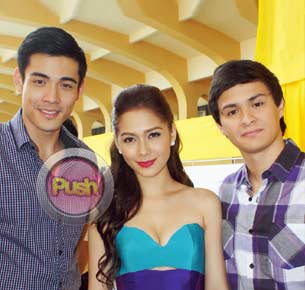 My Cactus Heart promises to give viewers a steady dose of “kilig,” whether it be between real-life sweethearts Maja Salvador and Matteo Guidicelli or between Maja and her other leading man, heartthrob Xian Lim.

The story revolves around the life of Sandy, a culinary student whose real passion in life is illustrating. Sandy grew up watching her mother (played by Rosanna Roces) pine after her father (Ricky Davao) who decided to separate from their family when she was still a little girl. Jaded by love, Sandy vowed to never let anyone hurt her heart like that again and she ends up continually turning down every guy who tries to court her, thus earning her the moniker, “Cactus Heart.” That is until she meets the hardworking Carlo who applies for a job at her mom’s catering business as a waiter. Sparks immediately fly but Sandy tries to continually resist feeling anything for Carlo, who is also a singer in a band trying to make ends meet despite his father’s penchant for betting on horse races.

Xian Lim comes into the story as the dashing Bene, Sandy’s boss at the production company she applies for in order to pursue her dream of continuing her passion for illustrating. Will Sandy end up falling for Carlo or Bene? You’ll have to watch My Cactus Heart to find out. But guaranteed, there are enough kilig scenes here that will make it worth your while. Fans of the Maja-Matteo love team will definitely get their dose of their favorite couple.

After playing a supporting role in the Sarah Geronimo-Gerald Anderson starrer Catch Me I’m Falling, Matteo proves to be a revelation as he convincingly plays a blue-collar worker who will do anything to keep their family home from being repossessed so he could protect the memory of his deceased mother.