Nikki Gil says she and Billy Crawford are prepared for a long-distance relationship. 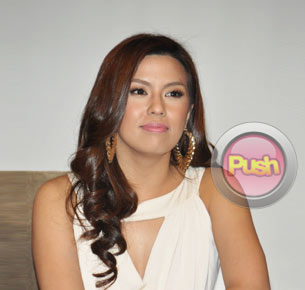 As Billy Crawford prepares to leave the country to focus on his international career this year, girlfriend Nikki Gil admitted she has mixed feelings about his decision. “Oo naman siyempre sad tayo but sad and happy at the same time because I know that this is something good for him and I know that something good will come out of it,” she said during the press conference for Mundo Man Ay Magunaw held last January 19 at the Dolphy Theater inside the ABS-CBN compound.

The 24-year-old singer-actress added, “He is leaving this year but thankfully I have this so this (the series) will take my mind off his absence (laughs). Pero modern ages na naman, meron ng Skype, meron naman ng cellphone,” she said.

Nikki admitted that even if she wasn’t doing a soap opera, she never considered joining her longtime boyfriend abroad. “Anong gagawin ko dun? (laughs) I have no business there. Kaka-bakasyon ko lang, hindi ko pa kailangan ng bakasyon and plus I’m busy with the things that I’m doing here,” she said.

The ASAP host claimed she has complete trust in her boyfriend, whom she would already consider to be marriage material. “Hindi naman kami tatagal ng ganito kung hindi ko siya tina-trust. I trust him but I don’t trust the people around him (laughs). Pero ang importante I trust him,” she revealed.