The actor says he is open to doing a project with Kim and Gerald this year. 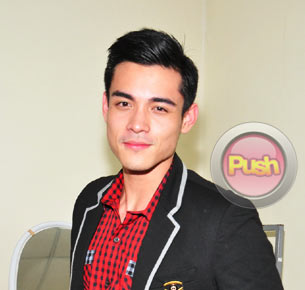 Aside from all the positive feedback the KimXi love team has been getting, Xian admits he is especially happy that the fans of Kimerald have also been supportive of Kim’s new pairing with him. The model-actor is also thankful at how vocal Gerald has been about being their number one fan “Siyempre thank you. Thank you kay Gerald kasi how nice of him to say that. Hinahangaan ko rin naman siya bilang isang actor and he’s also a good friend of mine. Palagi kaming nagba-basketball together. Super thank you na napapanuod niya yun at nagugustuhan niya. Nagkikita kami pag parties pero hindi kami masyado nakakapag-usap. Alam rin naman ni Gerald na number one fan ako ni G kaya pareho lang naman kaming humahanga sa isa’t isa,” he shares.

Xian also admits that he would be very open if ever he was offered a project along with Kim and Gerald. “Oo naman, bakit naman hindi. Wala naman akong nakukuha na mga negative na tweet. At kung meron hindi naman siya yung to the extreme. Of course I’m willing to do it,” he says. This supposedly has nothing to do with rumors that he is already officially courting Kim. Although his My Binondo Girl co-star Cherry Pie Picache alluded to it, Xian chooses to still keep the public guessing about his actions. “Si Ms.Pie nagsabi nun, everyone’s entitled to their own opinion. I just like to make Kim feel special. I want for her to be happy. Gusto ko lang ipakita sa kanya na special siya. Gusto ko lang sana i-clear na she’s really important to me. She’s special,” he stresses.