Kris Aquino says she has invited Gov. ER Ejercito to appear on her morning show

The Queen of All Media gracefully deflects Gov. ER Ejercito's accusations and says she is happy because of her movie's successful turnout. 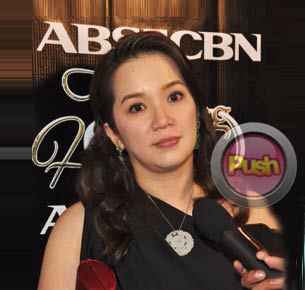 Star Cinema had a victory party last Thursday night, January 19 for the success of its Metro Manila Film Fest entry, Segunda Mano, which placed second in the MMFF box office. Lead star Kris Aquino did not disclose the exact figures that the film earned but gave a clue. “Nakita ko ‘yung tseke (for me), may dalawang comma, malaki ang kinita, na-happy ako sa bonus,” she said.

Kris Aquino had been vocal that she wanted to achieve two things for her movie; that it places second in the box-office and that co-star Dingdong Dantes gets the Best Actor trophy. Her two wishes were granted but not without controversies. For one, Laguna Governor and Manila Kingpin star ER Ejercito suggested that Kris’s statement of wanting Dingdong to win the acting trophy supposedly influenced the MMFF organization’s decision. The governor is one of the nominees for the Best Actor.

In response, Kris defended, “How can you manipulate the box office? ‘Yung wish na ‘yun at ang placement namin nanggaling sa hard-earned money na nagbayad para panuorin kami. As far as the award is concerned I don’t think I did anything that was not proper kasi di ko naman winish for myself. Winish ko for someone else who I felt was deserving of it and who treated me so well on the set and I felt did an excellent portrayal. Kung meron mang hindi natuwa na si Dong ang nanalo, there are other awards-giving bodies. It just so happened na ngayon sa kanya napunta.”

The Queen of All Media added that she was not hurt by this and prefers to dwell on the positive side of things. “Bakit ka mahu-hurt kung kumikita ka? I think ‘yung nahu-hurt lang ‘yung nalulugi. I have no business to be hurt because God has been good to me. Bitter ka lang talaga kung masyado kang greedy, I don’t think I was greedy.”

She continued that she would rather put this issue behind them. She added that she invited Gov. ER to be a guest in her show, Kris TV. “Ini-invite nga siya ng show ko in the way that we did one with Ate Vi (Vilma Santos) na tinour ako ng Batangas. Our show contacted his office already kung pwedeng i-tour niya ako all over Laguna, para love, love, love.”
Celebrity