Nasaan Ka Elisa star says she learned a lot of lessons from her break-up with Jake Cuenca. 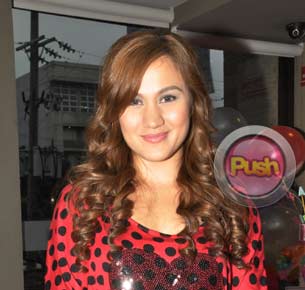 The 22 year-old attended a birthday party for her thrown by her loyal fans last January 8. “I’m very thankful kasi dati I was a fan as well. I was a fan, I was cheering and siyempre gusto ko mapalapit sa fans ko hindi lang bilang fans but as friends. That’s why mahilig akong mag-Tweet, mag-reply, because kung ako yun gusto ko rin reply-an din ako ng idol ko, kakausapin ako ng idol ko. So sana laging may ganito, sana laging may chance to spend time with them and have fun with them,” she said during her princess-themed birthday party.

Melissa couldn’t help but admit that last year was a very challenging one for her both personally and professionally because of her breakup with Jake Cuenca and her accepting the controversial role of Elisa. “Siguro blessing in disguise din yung nangyari sa akin nung 2011 hindi lang dahil kay Jake pero maraming mga pagsubok na naagdaanan ko nung taon na yun and pati yung reinvention ng sarili ko it wasn’t easy. 2011 was the hardest but at least it was the year that I learned the most and I can say na talagang kung last year okay na siya nung ending. This year it’s going to be the best year and I assure that to everyone. And I’m going to do my best in this show na Walang Hanggan and sana magustuhan ng mga tao yun,” she said.

The Fil-Am beauty admitted she has matured from all her experiences in the past year. “2011 was one of the hardest but I think it was one of the best also kasi Nasaan Ka Elisa? did so much for me, napakaganda nung palabas namin and I gained so many new friends, I learned so many new  lessons.  I learned na I have to be responsible. I learned that I have to grow up and I did grow up and marami akong pinagbago mula nun and I think na dahil dun ngayong 2012 handa na akong harapin ang mundo talaga ng bonggang-bongga,” she shared.

The Nasaan Ka Elisa? actress shared one of the best life lessons she has gained lately. “I learned that you have to be braver, you have to be stronger. Hindi mo dapat hinahayaan na apektuhan ka ng mga maliliit na bagay and I think na you just have to learn to be happy and accept what you have and don’t be so negative siguro. Siguro lagi na lang positive ang isipin natin. Basta ako sa 2012 sana happy lang talaga. That’s all I wish for in 2012. Sana 2012 will be bigger and better year for me and sana yung Walang Hang
Celebrity