Regine Velasquez is not pressured about having a baby soon

Songbird Regine Velasquez shares that she has no regrets with her decision to get married at 40. 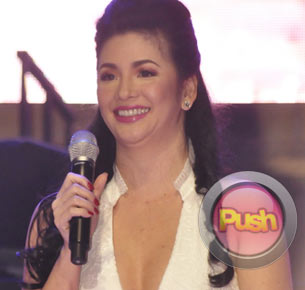 The 40-year-old singer also explained that she is not pressured to get pregnant. "Kung mabubuntis, eh 'lsquo;di okay. Kung hindi okay lang din," she justified. "I don'rsquo;t want to think about it anymore. It was a personal choice naman not to have a baby right away."

Regine previously revealed that she and Ogie had been living together for three years before they got married. It also took them a while before they finally admitted that they had been in a relationship because many detractors criticized their relationship.

Regine also added that she has no regrets of her decision to tie the knot with Ogie. "It was a personal choice because I wanted to do so many things. I wanted to travel, kasi nga kumakanta ako. Nung binigyan ako ng pagkakataon to decide on my own, I wanted to direct my concert, I was given the chance to do that, or to do films, to host although I'rsquo;m not a very good host. I was still given the chance to do that," she continued. "Gusto ko kasi bago ako mag-settle down nasabi ko na sa sarili ko na na-try ko nang gawin. Kahit hindi man ako naging successful kung anuman 'lsquo;yung gusto kong gawin, 'lsquo;di man ako nag-succeed at least na-try ko."

After her civil wedding with Ogie, (since Ogie'rsquo;s church wedding with Michelle Van Eimerenn is not yet annulled), the newlyweds are taking a three-week vacation before they go back to work. Regine shared that after their honeymoon, she will immediately go back to taping her upcoming teleserye with Dingdong Dantes.