Despite being part of two other MMFF movies, seasoned comedian John Lapus is especially proud of 'RPG Metanoia.' 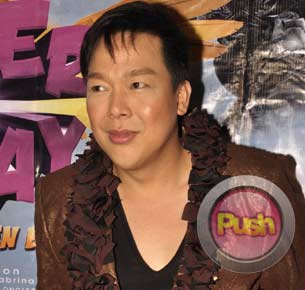 Despite being part of two other Metro Manila Film Fest entries, John Lapus could not help but share his sentiments after watching the animated film RPG Metanoia. "I watched it with my pamangkins and I loved it. No wonder it'rsquo;s graded A by the Classification Board. Maganda ang pelikula. It'rsquo;s clean, it'rsquo;s new, pambata, and pampamilya," he said. The Super Inday and the Golden Bibe star also admitted he couldn'rsquo;t help, but feel pride after watching RPG, which reportedly took three years to make. "Nakaka-proud as a Filipino na yung napanuod kong cartoon while wearing 3D glasses actually ay gawa ng Pinoy," he added.

Aside from RPG, John also looks forward to finding time to watch other MMFF entries, especially those of his good friends in the industry. "I promised Kris (Aquino) and Ai-Ai (de las Alas) that I would watch their individual movies, Dalaw and Ang Tanging Ina Mo, Last Na 'lsquo;To and in return, they promised to watch my movies," he shared.

John admitted that 2010 has been a good year for him, especially after ending it with two more movies under his belt. "Naku pressured na pressured na ako. Ang masasabi ko lang, I'rsquo;m so honored and thankful to God and of course to Regal films at sa dalawang director nung pelikulang kasama ako. Masaya na ko and other than that, it'rsquo;s those na manunuod at tatangkilik ng mga pelikulang kasama ako, I am so thankful to them sa suportang ibinigay nila," he said.

This year, John already has five more movies lined up for the first half of the year. After that, he plans to take a much-needed break from work. "By July or the other half of 2011, I want to rest and take care of my health. Gusto kong mag-bakasyon. Parang 15 times na akong nakakapunta sa Amerika pero lahat yun trabaho. May bakasyon on the side. Gusto ko na rin naman sana finally kumuha ng U.S visa na for tourist kasi laging working visa yung kinukuha ko. Yun yung plano ko sa 2011. U.S vacation to visit my friends and relatives. At saka makapagpahinga ng bongga kasi hanggang June limang pelikula pa," he explained. In fact, John'rsquo;s only resolution for the year is to be healthy. "I want to think of my health and to rest. Obviously kaya naman nagkakasakit kasi walang pahinga so I'rsquo;ve done naman my duties sa ating industriya itong 2010. Kumota naman sa akin ang telebisyon at pelikula and even theater for that matter. So itong 2011, half of that I would dedicate it for my health and for rest and vacation,'rdqu