Ahron Villena is happy to be back with ABS-CBN

Ahron Villena plays a merman in the new fantaserye 'Mutya.' 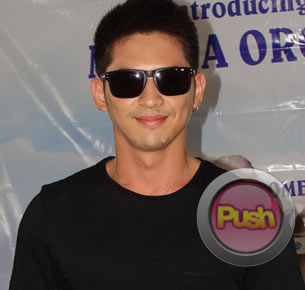 After his stint last year in a reality show on another network, Ahron Villena returns to ABS-CBN as part of the cast of the new primetime fantaserye Mutya. In an interview with Push.com.ph during the press conference for Mutya, Ahron clarified that there'rsquo;s no conflict with his latest network switch. "Actually may offer naman sa akin dun pero by March pa daw. My manager told me na may offer na agad, ito ngang Mutya. Actually may six-month contract pa ako with Survivor, pero nagpa-release na ako. They agreed naman so okay na."

Ahron said he was very thankful that he was given a role in Mutya because for him, there'rsquo;s nothing like coming back to where he came from. "Masaya ako kasi nabigyan ako ng ganito kagandang offer. I'rsquo;m happy to be with ABS-CBN kasi dito naman talaga ako nagsimula, MTB Idols na nun. I hope madami pang work ang dumating."

In Mutya, Ahron takes on the role of Zale, a merman who will rebel against his own clan. Doing villain roles is not a new challenge for Ahron because his last notable role in ABS-CBN was as the kontrabida in Precious Hearts Romances presents Somewhere in my Heart top-billed by Kaye Abad and Guji Lorenzana. "Ngayon hindi naman ganun kasama. 'lsquo;Yung sa PHR parang may tama na talaga sa pagiisip 'lsquo;yun. Itong sa Mutya tamang kontrabida lang."

Upon confirming what his role in Mutya was going to be, Ahron immediately hit the gym to get in shape since as a merman he will mostly be topless in his scenes. The biggest drawback however in being shirtless during taping is whenever temperature drops. "Ang kalaban lang namin is 'lsquo;yung lamig. Madalas nga kasi topless kami. Sobrang lamig kapag madaling araw na."