KC Concepcion prefers to leave the talking to Piolo Pascual when it comes to people's queries about their relationship. 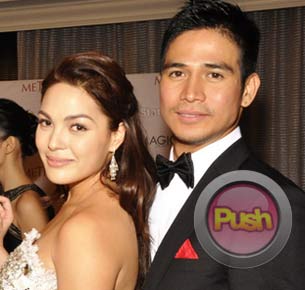 Ambassador for the World Food Program (WFP) KC Concepcion kept mum about her rumored sweetheart Piolo Pascual'rsquo;s reaction to her meaningful yet risky mission to Uganda last week. She also refused to disclose whether they had the chance to meet after her trip. Clearly, the young actress is sticking to her resolution to keep a low profile when it comes to her relationship with the country'rsquo;s ultimate heartthrob. "Siya na lang kaya tanungin ni'rsquo;yo [kung paano niya ako winelcome pagbalik ko dito sa Manila]. Tignan natin kung anong sagot niya dun," she said in an interview with ABS-CBN reporters yesterday, January 26.

According to KC, it doesn'rsquo;t feel right for her to be in the hot seat most of the time. "Parang siguro bilang host din ako, and may talk show ako, nagkakataon na ako lagi yung tinatanong at ako lagi yung nakakasagot ng mga tanong dahil ako yung nakakausap at nakikita ninyo, habang siya nasa Subic nagte-taping sa Noah." She further explained that it would be nice if people would know Piolo'rsquo;s side of the story as well. "Maganda din siguro na a friendship or a relationship between two people is between two people, not just one. Maganda rin na ma-remind siya at ma-remind kayo na hindi lang ako ang nasa friendship na 'rsquo;to."

In the meantime, she clarified that it was her mom Sharon Cuneta with whom she was in constant communication during her stay in Uganda. "With my mom bilang mommy ko naman siya, dahil siya ang may karapatan malaman kung nasaan ako."

As for her continuous efforts to help WFP'rsquo;s fight against hunger in the Philippines, KC invited everyone to support her online charity auction, KC'rsquo;s Closet, which has already raised over a hundred thousand pesos for the past two weeks. The luxury items which are currently available include several Louis Vuitton bags and designer gowns which KC wore in various celebrity functions. Just log on to http://stores.eBay.ph/kcsclosetfightschildhunger for more details about this project.