Derek Ramsay says he and girlfriend Angelica Panganiban are in no rush to get married. 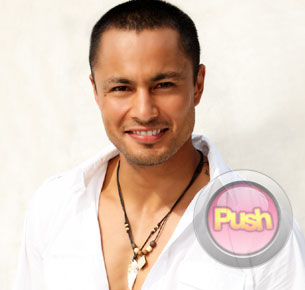 Derek Ramsay recently arrived from a weeklong vacation in England where he spent some time with his grandmother who also was celebrating her 90th birthday. The actor revealed that he has not seen his relatives for a couple of years. He shared that girlfriend Angelica Panganiban wanted to go with him, but had to to stay for the promotion of her upcoming comedy-horror flick, Bulong.

In an exclusive interview, Push.com.ph asked the actor about persistent rumors that he and Angelica had supposedly tied the knot when they went to Palawan for the New Year. "Every time we go for a holiday they always say that we'rsquo;re getting married," Derek replied. "Nung pumunta kaming Palawan I was with my family, we went there to spend New Year and walang marriage na naganap." He admitted that he had heard about the blind item about them supposedly getting married. "Wala pa, like I said, when we'rsquo;re going to get married we'rsquo;re going to talk about it [when it happens]," he stressed.

Derek shared that he and Angelica have talked about marriage in passing, but they don'rsquo;t dwell on the matter. He added that they have other priorities, like their respective careers, and that they are in no rush to get married. "What'rsquo;s the rush? I think it'rsquo;s (relationship) going so well," he pointed out.

He said that Angelica is still enjoying her showbiz career and he believes that she still has a lot more to offer to the industry. "But gradually we would want it (marriage)," he assured.

Asked for his reaction about Angel'rsquo;s recent statement that she would ask him to get married id she gets tired of waiting, Derek replied, "That'rsquo;s why I love Angelica. You know how she'rsquo;s really playful. She talks like that but like I said, 'lsquo;di naman siya nagpaparinig, 'lsquo;di naman siya nagyayaya. I think were very happy right now." The actor went on to say that they are currently happy with their four-year relationship.