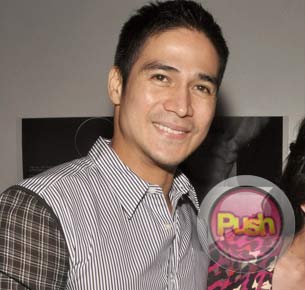 While remaining secretive about the real score between him and KC Concepcion, Piolo Pascual said he is not bothered by news linking his rumored girlfriend to other guys. KC has admitted being good friends with hunky actor Sam Milby and international Fil-American rapper Apl.de.Ap. The daughter of Sharon Cuneta is slated to do a movie with Sam as her new leading man.

Piolo clarified that he was actually the one who suggested to Star Cinema to pair KC with Sam since the two already are close in real life. "I can see that there'rsquo;s a chemistry. Sam is a brother. They are so alike in so many ways. Kung iisipin mo bagay si Sam at KC kasi pareho sila ng ugali. Sam knows his place and also with Kristina. It'rsquo;s very clear that they'rsquo;re friends."

But what if the film requires KC and Sam to do a kissing scene? Will Piolo be comfortable with it? "Artista tayo. Kahit ako naman nagkakaroon din ng kissing scenes. We have to know na character lang 'lsquo;yung ginagawa niyo," he answered.

While Piolo is wrapping up work on the primetime teleserye Noah, he is also busy with rehearsals for his Piolo meets the Maestro Ryan Cayabyab concert to be staged this February 14 at the PICC Plenary Hall. The actor/singer had collaborated with Ryan in previous concerts, and he described the "Maestro" as a humble instructor. "He is one person who will make you feel really comfortable. He'rsquo;s like a friend, napaka down to earth. Kapag na intimidate ka kasi there'rsquo;s a chance you won'rsquo;t perform well. Baka hindi ka na makagalaw. But Mr. C is very jolly. Napaka-patient din niya sa akin, napaka-considerate. It'rsquo;s an honor to be working with him."