Marvin Agustin says he will always be an actor at heart. 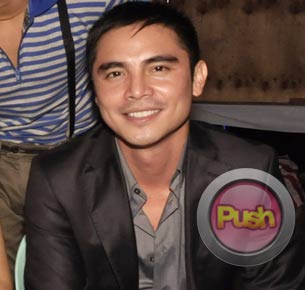 After the success of the 2010 Metro Manila Film Fest Best Picture entry Ang Tanging Ina Mo, Last Na 'lsquo;To where he reprised his role as Ai-Ai De las Alas'rsquo;s eldest son Juan, Marvin Agustin shared his thoughts on the how the critics warmly received what was reportedly the last installment to the film'rsquo;s franchise. "We wanted it to be this successful. We wanted the reception of the public to be like this because we really worked hard for this movie but the awards that we got was really overwhelming. It'rsquo;s something na we really did not expect. Masuwerte lang kami na yung jury, medyo yung panglasa nakuha namin, kasi ganun talaga, you need to please the jury kasi sila yung magde-decide. So I'rsquo;m very happy na naging ganun," he told Push.com.ph. The single father of two also admits he received an unexpected bonus which was handed to him personally by ABS-CBN CEO Gabby Lopez. "Meron pala so when I got it, I was so happy. Hindi ko pa nabubuksan kung ano man yun. Pero any plans where I'rsquo;m going to use it is para naman sa mga anak ko naman lagi. Yun ang laging nasa utak ko," he shared.

Known both as an actor and a successful restaurateur, Marvin said that even though he already has his hands full with the ten establishments which he and his business partners operate, he said that his love for acting will never take the backseat or be given up altogether. "No, that day will never happen. It will never come. I will be an actor forever," he stresses. The 31 year-old says that it is not easy trying to maintain two successful careers at the same time. "I just love to work. It'rsquo;s a challenge to manage but well sometimes I just get only four hours of sleep. I know it'rsquo;s not good pero parang gumigising lang talaga ako when I have to start working. So I rise up early even though sometimes I still sleep late," he shared. Because of his schedule, Marvin says that he is not as hands-on with managing the restaurants as he initially was. "During the start I was actually managing it. But after three restaurants, binigay ko na dun sa isa naming partner. Now I'rsquo;m involved with the conceptualization, that'rsquo;s where I come in and development. If there are changes that need to be done, ako dun. We have ten restaurants right now and we will be expanding this year in the first quarter until the second quarter of the year when we will be opening four more," he added.