Piolo Pascual will renew his contract with ABS-CBN

Piolo Pascual refutes rumors that he demanded a billion-peso talent fee from a rival network intent on hiring him. 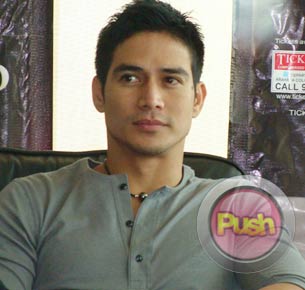 Piolo Pascual finally put an end to persistent rumors that he was switching stations. During the press conference for his concert Piolo meets the Maestro Ryan Cayabyab to be staged this February 14 at the PICC Plenary Hall, Piolo revealed that he is set to sign a new contract with ABS-CBN next month. He also explained that he is very much happy to be a Kapamilya. "I think makikita naman sa aura ko, ugali toward work, na happy ako with ABS-CBN. Wala po akong complaints, problema sa station. Wala akong kailangang isipin kung hindi pagbutihin pa 'lsquo;yung trabaho ko kasi they'rsquo;ve been so nice to me, gracious. Maganda 'lsquo;yung partnership namin ng ABS-CBN."

Another story that surfaced was that he demanded a talent fee of one billion pesos for three years from a rival TV network who wants to hire him as an exclusive artist. When told about this, Piolo laughed, "Sarap namang pakinggan 'lsquo;yun, ha ha ha! Sana totoo. Wow! Pangarap lang 'lsquo;yun!" But according to reliable sources, the proposed one billion-peso asking fee is very real, and that ABS-CBN offered Piolo a bigger amount so he would remain a Kapamilya.

The actor/singer/model joked that if he was ever offered a one billion peso talent fee, he would instantly take the bait. "Siyempre tao lang ako, ha ha ha!" But seriously speaking, Piolo said he values honor more than money. "Pero kasi sabi sa Bible, 'lsquo;Choose honor rather than riches.'rsquo; You have to protect your name first before you get blinded by material stuff."

What Piolo only admitted was that there were really offers from other networks and that he actually thought about making the switch. "Hindi pa naman ako nakapunta sa compound ng TV5, ha ha ha! But there have been I think more than negotiations, considerations, not just with TV5 but also with GMA7 and others. You want to grow din naman in this business. Hindi naman sa pagiging inggrato or walang utang na loob. You just want to do things na alam kong makakapagpa-grow sa iyo not just as a person, but also as a businessman and a celebrity. Pero masaya ako. Wala akong problema."

But in a surprise birthday party after his meetings, Piolo thanked ABS-CBN for giving him and his family a good life. He further underscored his intentions of staying with the channel by declaring, "I am staying as a Kapamilya!"