Jake Cuenca says he has always been vocal about how he considers Melissa Ricks as the special woman in his life. 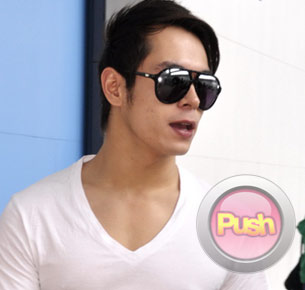 For the more than a year when he would be persistently asked about the real score between him and Melissa Ricks, Jake Cuenca had always said that he was courting the young actress but they were not yet officially together. But a few weeks ago, Jake admitted during on his appearance on The Buzz that he and Melissa have been dating for over a year already. Many were puzzled why the actor only admitted this at this time.

When Push.com.ph caught up with Jake during his rehearsal for an upcoming show for the Sinulog Festival in Cebu, he explained that he may have chosen not to say much about his relationship with Melissa, but he never lied about it. "Ilang beses naman nang nasabi na we are dating and I don'rsquo;t think there'rsquo;s anything wrong with that. All I can say is masaya talaga kami. I feel like parang vindicated after nung inamin ko 'lsquo;yung status namin." On the other hand, Melissa said during her appearance on The Buzz that she is very happy about exclusively dating Jake, but she prefers to keep all the other details of their relationship private.

Jake also told Push.com.ph that he had already bought a special gift for Melissa who celebrated her 21st birthday last January 9, but he refused to reveal what kind of gift exactly. The two had a great time spending Christmas and New Year together. For now though, according to Jake, their time is mostly devoted to their respective jobs.