Luis Manzano on Angel Locsin: Were off to a very, very good start

Luis Manzano says that he and Angel Locsin are not yet a couple but they are definitely getting closer. 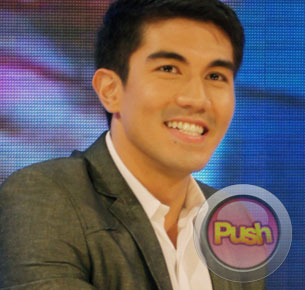 Luis Manzano confirmed that he and Angel Locsin are off to a good start again after they broke up almost a year ago. The actor-host revealed that he started going out again with Angel and has even visited the actress in her home just recently. "Nakalabas na uli ako with her friends. The same way na siya rin with my friends," Luis related in an interview last Sunday, September 5.

"Everything is on a very, very positive note. We're off to a very, very good start," Luis revealed. He added that having overcome the awkward stage after their breakup, he took pride in the fact that they have rekindled their friendship. "Kaya naming sabihin na hindi lahat ng nag-break na couples kayang sabihin ito. Pero 'lsquo;yung sa amin, we're off to a very good start." He was also quick to deny some claims that they are supposedly back in each other'rsquo;s arms.

People started to suspect that the former couple are giving their relationship a second chance because of their exchange of sweet comments on their Twitter accounts. "Sa Twitter kasi, siyempre no matter what happened between Angel and I, safe to say na nalagpasan namin 'lsquo;yung iba't ibang stages ng breakup," explained Luis. "Nandun kasi 'lsquo;yung medyo galit, medyo may bitterness, medyo may pagiging awkward.

Luis also related that they treat each other just like the old happy times. "Nakakapagkulitan na kami, nakakapag-asaran na... So, we're happy that we're back on track."

The son of Batangas Gov. Vilma Santos also defended Angel against claims that the actress has turned into a "party girl" and supposedly went out on dates and would get drunk. "Sabi ko nga nun, ang daming speculations na lumabas about her, ako mismo ang magsasabi na it's not true and it goes to show na hindi naman talaga totoo," Luis defended.