Piolo Pascual on KC Concepcion: I couldnt think of anybody else to take along

Piolo Pascual reveals that KC Concepcion is the girl who's closest to his heart right now. 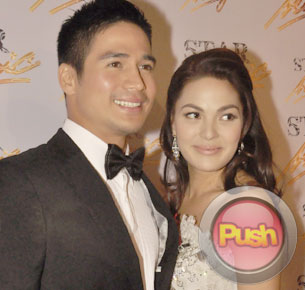 Piolo Pascual and KC Concepcion were among the last few couples who arrived at the 2010 Star Magic ball last September 5. They looked like the perfect pair with Piolo in his Hugo Boss suit and KC wearing a figure-flattering tube gown with matching clutch bag by designer Amir Sali. Although they have always been close especially after doing Lovers In Paris, Piolo revealed that he had to do a "little prodding" so that KC would agree to be his partner that night. "I thought it was understood but I had to ask her pa rin. I am happy [that she agreed]. I couldn'rsquo;t think of anybody else to take along," said Piolo in a quick interview with ABS-CBN.com.

But aside from the fact that she was being escorted by the country'rsquo;s ultimate heartthrob, KC shared that she feels privileged to be invited as one of Star Magic'rsquo;s VIP guests this year. "To actually be in the Star Magic ball is special for me kasi I'rsquo;m not technically from Star Magic. I got an invitation separate from Piolo so it'rsquo;s really something that I appreciate." She also confessed that she feels more relaxed this time around. "Kasi last year was my first time to attend the Star Magic ball and he was working back then so we didn'rsquo;t have enough time with each other. So at least now, we were able to enjoy the whole night together."

When asked about the real score between them, Piolo claimed that he'rsquo;s actually happy that a lot of people want them to become a couple, but they are in no rush to jump into a relationship just because they'rsquo;re expected to do so. "We'rsquo;re still friends. We'rsquo;re definitely closer. We definitely know each other better. Our relationship is still new." Apparently, it was KC'rsquo;s spontaneity which endeared her to him the most. "I like her simplicity, naturalness. She's very candid and napaka-down to earth," he added.