Queen of All Media Kris Aquino rushed son Baby James to the hospital due to on-and-off fever. 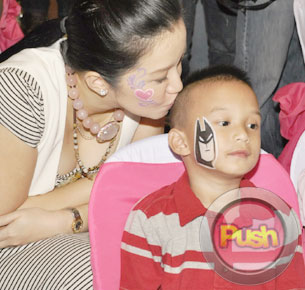 Kris Aquino posted on her Twitter account last Tuesday night (September 7) that she had Baby James confined in the hospital because of high fever. "Had to confine Bimby (Baby James). We'll do dengue, typhoid, and pneumonia screening. Please God let my baby be healthy!" Kris tweeted.

The Pilipinas Win na Win host has been constantly updating her Twitter account with regards to her son'rsquo;s on-and-off fever. Kris first post about her son'rsquo;s fever was made on September 4, Saturday, which went, "Bimby had fever (38.8) at 6 a.m. We gave him medicine and now 37.3. Poor one'mdash;parang may hallucination because he kept talking about Lola Cory, Bimby told me several times Lola is dead. She's in heaven. A part of me feels every time my kids get sick, mom makes pakiramdam to reassure them and me. So hard to work when my baby's sick."

After two days, on September 6, Kris said that her son'rsquo;s fever returned, so they gave him antibiotics and said that she had Baby James'rsquo;s blood tested and results showed that he was negative for dengue.

A few hours before Baby James was admitted to the hospital, Kris shared that she Baby James had a blood test again at St. Luke'rsquo;s Medical Center in Global City and they found out that his platelet count went down "not dangerously low, but still went down. They have a new machine to test early onset of dengue. Praying that he'll be healthy very soon!" Kris tweeted.

In June 2009, Baby James and his older brother Joshua were hospitalized due to dengue.

Updated: As of 12NN today, September 8, Baby James tested negative from dengue and typhoid. He's being treated for a viral infection.