Mariel Rodriguez talks about her engagement with Robin Padilla, their wedding in India, and their plan to raise a family in the future. 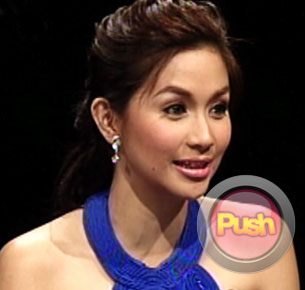 For the first time, Mariel Rodriguez admitted that she and Robin Padilla got engaged right after the premiere night of her horror movie, Cinco, last June 15. Just like the other events in their whirlwind romance, Robin'rsquo;s marriage proposal came unexpectedly according to the love-struck actress-host. "It was just so perfect and romantic. It'rsquo;s not like when you plan it, you set up candles or whatever. Yun we really needed candles kasi brownout. I was tired from the premiere night, naidlip ako for a while. Tapos parang may na-feel ako. When I woke up [I was shocked and speechless when I saw the ring on my finger].'nbsp; I looked at him and I was like, 'lsquo;Huh?!'rsquo; And then he asked me and I said yes," she happily shared in a one on one interview with Bianca Gonzalez on Entertainment Live.
'nbsp;
When she followed Robin to India last August 17, Mariel knew that she was going to take the plunge since she and Robin had always dreamt of getting married at the Taj Mahal. When asked why she didn'rsquo;t even let her grandparents know about her real intention in going there, Mariel simply replied, "Alam naman nila. It'rsquo;s not like hindi kami nag-uusap. Apat lang kami'mdash;me, my sister Kaye, my lolo and my lola." Why then did her grandmother cry when she first heard the rumors about their marriage as shown in a previous footage of Entertainment Live? " You know me. I cry about the littlest things. Meron akong pinagmanahan [which is my lola]. But they'rsquo;re very very happy for Robin and I. As in many times, my lolo will always assure me na yung blessing nila binigay nila. Yung fear ng lola ko, normal lang. gusto niya makahanap ako ng tao na magmamahal sa akin. Pero hindi ibig sabihin nanghihinayang sila."

As to the media'rsquo;s collective dismay over the circus that their controversial relationship has created, Mariel maintained that she and Robin never lied about their marriage in the first place. "Again, kahit i-playback lahat ng mga videos from the time that I came back from India. Gretchen Fullido (Star Patroller of TV Patrol World) interviewed me and Robin at the airport. Ang sinabi ko sa kanya, bumalik kami for Ali. I did an interview for E-Live, there sinabi ko din na may panahon para pag-usapan ang lahat. It'rsquo;s just that at the time, we wanted it to be for Ali. E-Live also showed a footage where Robin said, 'lsquo;I came back with my wife'rsquo;? Nung time na yun hindi pa niya ako wife. That was my first day in India. We got married on the second day. So really, show me that I lied or that I denied it because we never really did. I just said may time para diyan. But I respect kung ano na-feel nila," she explained.

Mariel further shared that she has no regrets about marrying Robin despite the negative feedback against her. At this point, she believes that the overwhelming love and happiness that they have for each other would help them surpass the hurdles along the way. When it comes to their future plans, however, Mariel couldn'rsquo;t help but be emotional by the mere thought of losing Robin who'rsquo;s 14 years her senior. "We have talked about having kids. Maybe we'rsquo;d like to have just one, but not anytime soon. Maybe 8 or 10 years from now. But he's the one... He