Carol Banawa signs an album contract with Star Records and prepares for upcoming TV appearances and other gigs. 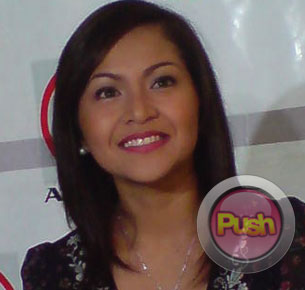 Carol Banawa takes a break from her life as a wife and mother in the US and comes home to the Philippines to record an album under Star Records. PUSH.com.ph was at Carol'rsquo;s contract signing with Star Records attended also by the label'rsquo;s head Malou Santos, Managing Director Annabelle Regalado Borja, and Carol'rsquo;s manager Biboy Arboleda. The album, to be produced by singer-composer Aiza Seguerra, will feature mostly revivals plus two original songs.

There will still be discussions if Carol will also do acting projects in ABS-CBN, but she said that for now the priority is her album. She shared that her decision to come to the Philippines for a while with her daughter and record an album has the blessing of her husband, a military man based in the US. "May blessing naman itong project na ito ng husband ko. Ang request lang niya is makabalik kami sa States for his birthday. Two years ago na rin kasi namin siyang hindi nakakasama sa birthday niya. Two years ago he was in Iraq, and last year I was in Arizona kasi dun ako nag-school." Carol just finished her studies as a nurse.

Carol began her career as one of the child stars in Ang TV. She went on to become a top-selling recording star. She acted in a few TV dramas and in the movie Tanging Yaman. She left showbiz when she got married in 2003 and moved to the US. Now that she'rsquo;s back, Carol said she is looking forward to having a reunion with some of her showbiz friends. "Puro text lang kami ngayon. Alam nilang nandito na ako. Ka text ko sina Kaye (Abad), Rica (Peralejo), Nikki (Valdez), Camille (Prats). Gusto nga naming mag-reunion kasi halos lahat sa amin may mga asawa at anak na. Gusto namin ng playdate para magkalaro 'lsquo;yung mga anak namin. Masaya kung kaming mga Ang TV kids dati mag-get together. Masaya na 'lsquo;yung mga mommies."