Gretchen Barretto looks forward to her project with Angelica Panganiban

Gretchen Barretto is positive that a beautiful friendship will blossom between her and Angelica Panganiban. 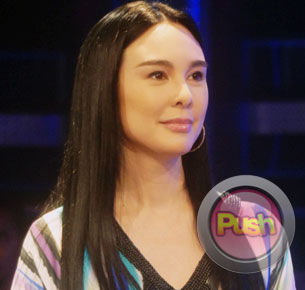 While Gretchen Barretto is cherishing the high ratings and rave reviews for her primetime teleserye Magkaribal, it'rsquo;s also confirmed that ABS-CBN has another project lined up for her. Next year she will get the chance to work with newfound friend Angelica Panganiban. This only proves that Gretchen and Angelica have put whatever negative issues behind them and are willing to become great friends.

On the set of Magkaribal, Gretchen shared, "Nasabihan na ako ng management na my next teleserye will be with Angelica Panganiban. I was very excited. I kind of had an idea na kasi nasabi na nila like a month or two months ago pa.Pina-feel na ng management sa akin na baka magka-work kami ni Angelica but they didn'rsquo;t know yet that time kung movie or teleserye. We are not sure yet kasi wala pa kaming meeting."

It was also during one of the tapings of Magkaribal when Gretchen and Angelica first met right after they said on TV that they are ready for reconciliation. But ever since that meeting, their busy schedules had prevented the two from having more bonding time. "Hindi pa kami nakakapagusap dahil sa schedule namin. Di ba alis siya nang alis papuntang US. Wala na kami parehong social life. Sana makabisita siya sa amin uli saMagkaribal."

Gretchen'rsquo;s Magkaribal leading man who happens to be Angelica'rsquo;s boyfriend Derek Ramsay was caught in the middle when controversy sparked. But in the end, Derek became instrumental in patching up the two actresses. There are talks that in this project starring Gretchen and Angelica, Derek will be their leading man. "May feeling ako si Derek ang makakasama namin. Mas masaya! Ha ha ha!," said Gretchen.

The good thing now is that Gretchen has something to look forward to, not only a new project but a new friendship with someone she has grown to like. "Excited ako kasi alam ko si Angelica masaya kasama. I'rsquo;m sure we'rsquo;ll have a lot of fun kasi may pagkaloka loka 'lsquo;yun like me, ha ha ha!" Gretchen added that since most common friends are saying that she and Angelica have so many similarities, they are more likely to become best of friends as soon as work begins. "I'rsquo;m sure a beautiful friendship will blossom dahil matalik kong kaibigan si Derek. Hindi malayong mangyaring maging close rin kami ni Angelica. Lalo na ngayon na gagawa kami ng teleserye. Ayoko rin naman na magkaroon ng katrabahong hindi ko ka-close. Mahirap 'lsquo;yun."

Gretchen confessed that she has seen how good an actress Angelica is, that'rsquo;s why she feels that she needs to be on her toes once production for their project begins. "Fan ako ngRubi. Tumigil lang ako sa panonood nung mag-