EXCLUSIVE: An insider gives the details of Robin Padilla and Mariel Rodriguezs unplanned wedding in India

An ABS-CBN insider gives a tell-all interview of how Robin Padilla and Mariel Rodriguez tied the knot in India. 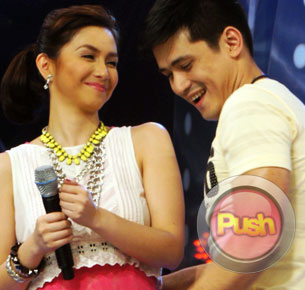 ABS-CBN Publishing Assistant Operations Manager Shiela Quieta attested to the fact that Robin Padilla and Mariel Rodriguez had a very intimate wedding ceremony during their short trip to India last August. But contrary to other people'rsquo;s speculations, the real reason why they went there was for a "special project" for Robin alone. There were only four people in the project group before Mariel joined them during their last two days in India. "I don'rsquo;t know when or how they reached the decision that they wanted to get married there and then. But the wedding itself, hindi siya plinan. Actually, si Robin imbis unahin yung wedding, inuna pa rin yung work kasi yun naman talaga ang pinunta dun. Hindi umangal si Robin kahit na sobra-sobra ang excitement niya to marry Mariel that day (August 19)," said Quieta in an interview with Push.com.ph.

Robin left Manila for India on August 14, sans Mariel who was supposed to fly with them that same day but, unfortunately, got held by her work commitment for Pilipinas Win Na Win. Quieta claimed that Robin felt let down and was always on the phone with Mariel all throughout the days that they were apart. "Nung una hindi sila magkausap [ng mabuti], hindi nakakaka-receive ng text messages si Robin from Mariel and it added to his disappointment. Kailangan pa i-forward ni Mariel sa akin yung mga messages niya for Robin saka ko ipapabasa sa kanya. Malungkot talaga si Robin pero hindi naman siya pasaway or nagpabaya dun sa work namin," she recalled.

But as soon as Quieta heard from Robin that Mariel could make it for the latter part of their stay in India, that was when she had an inkling as to what would happen when they visited Taj Mahal, which is known as one of the seven wonders of the world as well as a structure that symbolizes eternal love. "Monday namin nalaman. Nung day din na yun medyo naramdaman na namin dahil maririnig mo nagpapaayos siya ng damit for Mariel dahil plano nilang magpunta ng Taj Mahal. Pero hindi niya minemention na may kasal na mangyayari. Hindi rin namin siya tinanong about it. But I had an inkling because Robin has always been very vocal about wanting to visit Taj Mahal with Mariel in our previous meetings."

On the day of Robin and Mariel'rsquo;s wedding, Queita called Robin at around 5 am since they had to get started with their last session for work. They were in a rush because the group had to return to Manila later that day. "When I called him, he told me that he couldn'rsquo;t make it for our call time. Hindi daw niya kaya. Pero nakakatuwa kasi after 30 minutes pinuntuhan din niya kami and nakabihis na siya for the wedding. You could see that he was really happy, maaliwalas yung mukha niya. Sabi niya, 'lsquo;Ready na ako!'rsquo; But we asked him to change his clothes because we had still had work to do."

For the wedding ceremony, Robin looked casual but dashing in his striped pink long-sleeved shirt, jeans, and leather boots, while Mariel was wearing a yellow sari which Robin bought for her even before she arrived in India. "It was Mariel who picked the color though. She wanted yellow for her wedding dress because she was always in yellow every time something significant happens to her and Robin. Yung pinakita ni Mariel yung ring niya from Robin sa E-Live naka-yellow gown siya pati yung first time din ata nilang mag-meet. Feeling kasi ni Mariel may pattern so this time sinadya niya na mag-yellow."

When they arrived at the Taj Majal, Quieta further shared that Robin'rsquo;s spiritual adviser Sameer Raza had to look for an imam who would officiate the wedding. "Pagpasok pa lang nagtatanon