Kris Aquino reveals a few hints as to who's keeping Jason Abalos inspired these days. 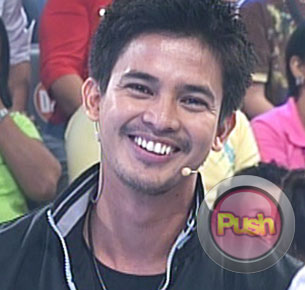 Many were surprised when Kris Aquino revealed in Pilipinas Win Na Win'rsquo;s September 18 episode that she knows the girl whom Jason Abalos is courting at the moment. The latter happened to be one of the celebrity players in the noontime show'rsquo;s segment AyuSing Nyo Na when Kris clued the viewers in on the identity of the newest apple of his eye. Apparently, she seems to be very close to the girl in question. "Si Jason alam ko din kung sinong nililigawan. Kasama ko siya kagabi. Pinakita niya sa akin lahat ng text mo," she exclaimed, much to Jason'rsquo;s surprise. Dimples Romana'mdash;who was also one of the celebrity players in Ayusing Na To that day and Jason'rsquo;s former co-star in Agua Bendita'mdash;couldn'rsquo;t help but tease him as well.

Push.com verified via Kris'rsquo;s tweets that the visitor in question was no other than Kim Chiu. "Kilig si Bimby, Alexa his #1 GF visited him. Kuya Josh is also here. Dra. Vicki sent him a Buzz Lightyear robot. Praying talaga na tomorrow we can be discharged. Ate Gwen, a.k.a. Kim Chiu also on her way to visit Bimby." Kris and Kim became close friends ever since they worked together in the teleserye, Kung Tayo'rsquo;y Magkakalayo.

But is Kim ready to entertain suitors soon after her rumored breakup with Gerald Anderson? And will Jason stand a chance if she is?

Want to get the latest chika from Kris Aquino? All you have to do is subscribe to her KText by keying in KRIS 'lt;space'gt; ON and send it to 2366.