The couple sprung another surprise on everyone when pictures of them being blessed by a native priest in a traditional Ibaloi wedding ceremony were released. 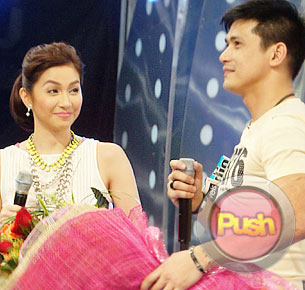 The showbiz world was rocked when reports from ABS-CBN Baguio correspondent Myra Walis revealed Robin Padilla and Mariel Rodriguez nuptials in the City of Pines through a traditional Ibaloi wedding ceremony.

People present at the ceremony were Robin'rsquo;s relatives on his mother'rsquo;s side of the family, who lived in a compound at Camp Seven where the ceremony was held.'nbsp; Robin'rsquo;s son Ali was also there to witness the event. Jimmy Ong, the Mamburao who did the wedding ceremony first thought it was just a shooting for a movie but was completely taken by surprise when he saw the couple wearing traditional Igorot costumes. "Tinawag ako ni Robin, sabi niya kasal, para daw maniwala si Mariel na Igorot siya. Sabi ko anong klaseng kasal, sa ka-Igorotan ba? Sabi niya oo, kaya nagcostume pa ko," Jimmy shared to the press. Robin further explained to him that he wanted to get married the Igorot way because of his mother Eva Carino'rsquo;s lineage.

Robin and Mariel were blessed by the priest and drank rice wine as a symbol of their love. They even did a native dance, which announced that they are indeed married. A pig was also slaughtered and its blood was painted on their cheeks, a symbol that made the marriage legal. The ceremony lasted for an hour and a half.

It was also reported that after the Ibaloi wedding rites, Mariel and Robin decided to have another ceremony this time with a pastor present. Showbiz News Ngayon hosts Boy Abunda and Bianca Gonzalez, who are both closefriends of Mariel (with Boy also being Mariel'rsquo;s talent manager) admitted that they were also surprised with this announcement. Bianca said she hopes to get the details of the marriage from Mariel herself while Boy said that he supports Mariel'rsquo;s decisions as long as it makes her happy.