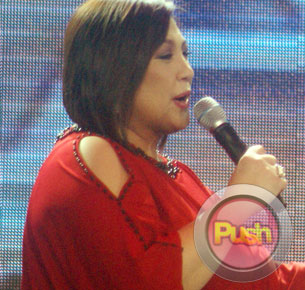 With three new shows in the works, fans of Megastar Sharon Cuneta can'rsquo;t wait for Sharon At Home (which will air on Lifestyle Network), Star Power, and The Biggest Loser Pinoy Edition to air. With a lot of work lined up for her, it was surprising when Sharon admitted to media during her press conference at the ABS-CBN compound last September 9 that she had seriously considered retiring from showbiz a couple of times already. "It hits me every once in a while, because I'rsquo;m not longer 25. I'rsquo;m now a mother. What used to be so easy to do physically is not so easy anymore. Dati kahit tatlong gabi walang tulog okay lang eh. Ngayon parang your priorities change talaga as you grow older," she says. The doting wife and mother of three also admits she wants to always prioritize her family if she can.'nbsp; "My children are growing up so I don'rsquo;t enjoy being away from them. And when my husband is going through a tough time in his work, I want to be there for him when he gets home just to comfort him, so we can be there for each other," she shares.

The industry icon, who'rsquo;s been in showbiz for a long time, blames divine intervention as the reason why she has not given up being in the spotlight. "When I think of retirement, God gives me a very clear sign through movie projects like Madrasta and Caregiver. Then now I all of a sudden have three shows, all at the same time! So parang andito na ako sa point ng buhay ko na after three decades in show business, parang now it'rsquo;s the time to give back. Tapos habang nagbibigay naman ako, marami pa rin si Lord binibigay sa akin. Tuwing gusto kong mag-retire, isang damakdak ang dumadating sa akin [na projects]. Parang sign yun na parang sinasabi ni God na, 'lsquo;Huwag muna anak, marami pa tayong project.'rsquo; (laughs). So ako naman, masunuring anak. So 'lsquo;pag sinabing ganito, may chance na may ma-touch akong life, lalo na kung makagawa ako ng malaking difference sa buhay ng kahit isang tao. Yun ang mahalaga sa akin. Siyempre natutuwa ako kasi magandang ehemplo sa mga anak ko, yun lang tina-try ko, pini-pray kong mapanindigan ko lahat iyon," she says. Sharon says she takes these signs as another opportunity to do good and entertain more people while she still can. "Now it'rsquo;s no longer about turning a regular paycheck. Parang I want that at the end of my life, I'rsquo;ll be able to say na I did a lot for others in your very short time on this earth. Sorry I'rsquo;m not a self-righteous person pero it'rsquo;s so much easier to do good things for other people than to be selfish. At least that'rsquo;s how I am," she explains.

Sharon says she was also looking to do something different from the usual talk show musical format she was doing on Sharon. I was also in need of a change. Parang I was not the only person that could keep on doing what I was regularly doing. Though I enjoyed it. Pero after a while, there had to be a higher calling. And in my humble opinion, this is part of the higher calling. And this is all I know how to do. I love to sing. I love to act. I love to perform. I love being in this business, I just don'rsquo;t like the business. But I love being in it. I love having a family in the press. I love having a family on TV, in the movies. It'rsquo;s all very personal to me now and I'rsquo;m just earning my keep," she says.