Lea Salonga shares that she will only allow daughter Nicole to join showbiz if she wants it with all her heart. 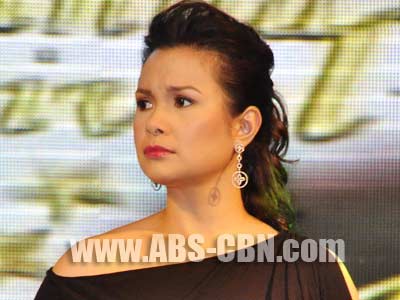 For the first time, Lea Salonga had the chance to introduce her daughter Nicole Beverly to the entertainment press during the launch of her new endorsement Bounty Fresh Chicken last April 12. Not only did the four-year-old answer some of the reporters’ questions, but she also enjoyed posing for the cameras, much to everyone’s delight. “I try to bring her along [to my events] as often as possible and she likes to come along din, e. She enjoys the attention she gets when she's around us. She seems to enjoy it and she's not intimidated by the presence of new people and media. And it's good because it's a big part of mommy's life for her to see that it's a good thing, hindi niya kailangan ikatakot,” Lea proudly shared.

When asked if she would allow her daughter to join showbiz at an early age, Lea explained that she wants to make sure that Nicole will be ready for the responsibilities of being a celebrity first and foremost. “It cannot be, 'Sure, I'll try it out.' Puwede ba! 'Wag na lang, it's a waste of time kung ganun yung attitude mo. I'm not going to make her do this if she doesn't have the desire and the willingness to learn everything you need to learn in order to do this well. It's not all about talent and patience. When you have to wait for hours and hours on the movie set or photo shoot or wherever. That's just the way it is, that's the way the job is."

With her vast experience as a world-renowned singer-actress, Lea knows very well that the life of a celebrity is not all glamour since she also had to make sacrifices over the years. “It's something na I felt God wanted for me but not by any other human being. Like my cousin—a ballet dancer, she’s a prima ballerina—she said, 'This is chosen for me, God chose this for me.' That's what would she say when you ask her why she became a ballet dancer. I was listening to her say that, and you know what, that is kind of what I feel as well, na parang ang Diyos mismo ang pumili ng buhay na ‘to para sa 'kin, and that I was made to do this job,” she explained.

But if Nicole will insist on following in her footsteps, then she’s willing to be there for her daughter every step of the way. “We'll just have to heavily supervise her, and I know the Lola (referring to Mommy Ligaya) will stop supervising me and start supervising her, and she'll just have to be accompanied everywhere. It's a full-time job being her chaperone also, so we'll just have to see. I don't know if Daddy wants it yet,” she added.