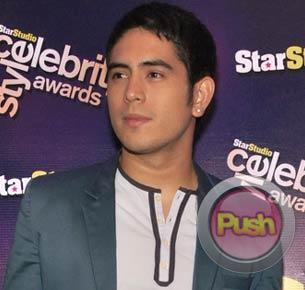 Fresh from the Heartthrobs concert tour in London, Gerald Anderson was besieged by the local media around 4:30 am at Ninoy Aquino International Airport (NAIA) to ask him if there'rsquo;s truth to the rumors that he broke up with rumored girlfriend Bea Alonzo during their trip abroad. Previous reports mentioned that the young actor was forced to put an end to their blossoming romance due to the violent reaction of some avid fans. But instead of clarifying the issue, Gerald avoided the media'rsquo;s queries by claiming confusion about what the people want to know from him. "Talaga [may ganong balita]? Alam mo, hindi ko talaga maintindihan kung anong gusto malaman sa amin kasi yung iba [sinasabi] napa-kasweet namin [ni Bea] tapos ngayon break na kami o on pa kami. Basta alam mo yun, 'lsquo;di ko rin talaga maintindihan ngayon e," he reasoned.

Bea, on the other hand, was with the rest of the group at the airport, but her handler immediately escorted her out and even pleaded with the local media to leave the young actress alone at the time. In the meantime, Bea'rsquo;s fans who saw her perform in London expressed their all-out support despite the non-stop intrigues towards her. "Among all the artists, marami kaming nakikitang good qualities about her. She remains humble and naa-appreciate niya na sumusuporta ang mga fans niya."

Those who watched the Heartthrobs concert in London, however, were disappointed because Bea and Gerald did not perform any production number together. Many also noticed that the two maintained a safe distance away from each other throughout the show. But whether or not Gerald is pursuing Bea remains unclear since both their camps are still mum about this controversy.

'mdash;From a report from TV Patrol