Luis Manzano says he only gets to be with Alodia Gosiengfiao for work. 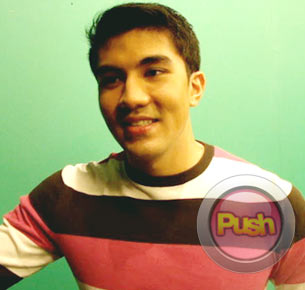 Luis Manzano and showbiz newcomer Alodia Gosiengfiao spoke with The Buzz to finally put an end to rumors linking them to each other. Luis, who recently revealed that he is no longer getting back with ex-girlfriend Angel Locsin, is puzzled why there are claims that he and Alodia have been spotted together many times. "Once ko lang nakasama si Alodia, and after that we decided to eat out. Pero after that, wala na, hindi na kami nagkita. Trabaho na lang kapag nagkikita kami. It'rsquo;s weird na may taong nakakita sa aming nagde-date nang maraming beses," Luis told The Buzz. Luis and Alodia will host the new show on ABS-CBN entitled Laugh Out Loud or LOL.

After Alodia'rsquo;s name was dragged into the controversy for allegedly being the third party in the Luis-Angel relationship, Luis immediately apologized to her. In a separate interview with Push.com.ph, Luis shared how he met Alodia, who is known as "Queen of Cosplay." "Sa Facebook lang kami nagkakilala. Then we met and I hosted an event for the cosplayers and she was there. From then on naging friends na kami."

Given their respective busy lives, the two would only have the chance to talk online. Back then Luis already knew that Alodia has a potential to be a TV host. "Nakakatawa kasi she was offered na mag-host sa TV. Inaasar ko pa siya na, 'lsquo;Uy! Host na siya!'rsquo; She told me about the workshops that she had to go through. She was very nervous and tawa siya nang tawa sa mga ginagawa niya. I told her na, 'lsquo;Okay lang 'lsquo;yan!'rsquo;"

Only when the unit of Direk Lauren Dyogi began planning for LOL did Luis and Alodia meet again in person. Luis further shared, "I got a call sa ABS-CBN for a screen test of me and another host. Wala akong idea kung sino 'lsquo;yung makakasama ko. Nakaupo ako sa labas ng office while waiting, then I saw Alodia with her mom. Sabi ko sa sarili ko, 'lsquo;Imposible! What a small world?!'rsquo; Lumapit ako sa kanya, she said na she will do a screen test. Then lumabas na si Direk Lauren."

Luis is one of the most visible male TV hosts on ABS-CBN with shows that include ASAP XV, E-Live, Panahon Ko 'lsquo;To, and the new season of Pilipinas Got Talent next year. But with LOL, he said that viewers should watch out for his fresh chemistry with Alodia. "She'rsquo;s very out-of-the-box, I mean she'rsquo;s into cosplays. She would do anything and everything for it. It shows na she has a very different personality. Sana ma-translate 'lsquo;yun sa energy na mapapanood ng mga viewers namin sa LOL."